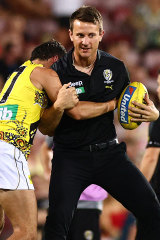 Thanks, Ivan: The Tigers owe Maric a debt of gratitude.Credit:Getty Images

Snap Shot is a weekly column taking a look at the lighter side of football.

Forget Royce, Richo or Dusty, Richmond should build a statue outside Punt Road at the end of this season named 'Ivan' to honour the rich vein of talent Ivan Maric has introduced to the Tigers since he arrived from Adelaide in exchange for pick No.37 in 2011.

The conga line of acquisitions the Tigers have snared under the most casual of policies – politely enquiring who Maric is accompanied by any time he is spotted entering the club – has continued to grow.

His cousin Ivan Soldo signed as a category B rookie in 2014. The ruckman played in last year's premiership team but is unfortunately out for the rest of this year after doing his knee against Geelong on Friday night.

Then came Noah Balta, who as a youngster had known Maric hanging out at St Alban's soccer club.

Balta's dad, also named Ivan, was happy when the Tigers called out his son's name at 25 in the 2017 national draft. Noah was rapt but surprised, later joking on Fox Footy: "Did something dodgy just happen?"

Balta's emergence as a key defender this season has been outstanding with the Tigers barely missing a beat following Alex Rance's retirement. 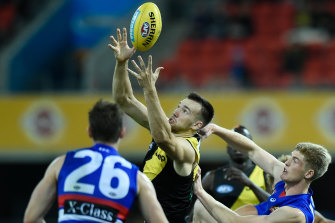 On the rise: Noah Balta has enjoyed an impressive season in defence.Credit:Getty Images

Then last week the Tigers signed Mate Colina as a category B rookie. Colina, the former basketballer who stands at 213 centimetres, is Balta's cousin and rates Maric as one of his mentors in life. His Dad's name? Yep, no surprises there, it's Ivan.

If the Tigers can snare a premiership in the next decade with Soldo, Balta and Colina all in the team the club can reflect on how it all started with the far from terrible idea of snaring Big Ivan. 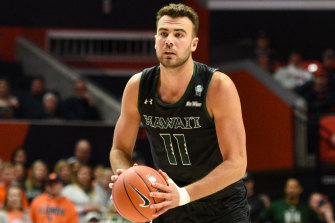 SWAB'S TOUGHEST JOB
Testing for COVID-19 has become a regular part of an AFL player's life in 2020 but the procedure can be a bit harder when your face has been temporarily rearranged.

Collingwood wingman Chris Mayne fractured his cheekbone against Carlton when he stood his ground against a rampaging Patrick Cripps and copped an accidental shoulder in the face for his trouble.

Although Mayne's head looked like a smashed guitar he had to front up the day after surgery to repair the cheekbone for a COVID-19 test, with the nasal swab's thin stick needing to navigate his flattened nose. 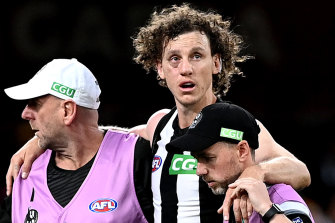 Chris Mayne is helped from the field after his collision with Patrick Cripps.Credit:Getty Images

SONG SUNG BLUE
Last Tuesday night as the Blues charged home to defeat Sydney at Metricon Stadium most of their supporters were huddled around televisions in Victoria.

But many of the loved ones of Carlton players and staff were less than 10 kilometres away from the ground in the AFL's quarantine hub on the Gold Coast at Carrara watching the game together on a big screen.

After the siren sounded – soon after young Blue Matt Cottrell kicked a goal to seal a come-from-behind victory – word has it the families showed just how invested they were in the win.

Keeping socially distanced, as they are required to do in Queensland, they stood in a circle and belted out the theme song together as the Blues celebrated on screen.