Snap Shot is a weekly column taking a look at the lighter side of football.

Former Magpies and Saints midfielder Nathan Freeman has made a great fist of life post-football, working with Connors Sports Management after his AFL career ended on two senior games when he suffered soft tissue injury after soft tissue injury in the five years he spent on AFL lists.

However, the easygoing and popular 25-year-old did not give away the game once his AFL dream ended, signing on to play for Frankston in the VFL. 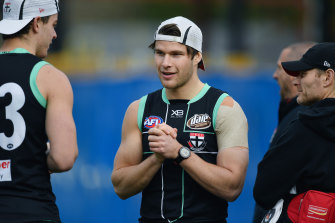 Former Saint and Magpie Nathan Freeman has been in brilliant form in the VFL.Credit:Joe Armao

That’s great for the relationships he has with the huge crop of talented players on AFL lists that Connors Sports manages, as he can relate to their weekly routine better than most.

The only problem is that Freeman’s form has been so good in the first three matches of the season – Frankston are undefeated – it’s good luck for any client who comes up against the Dolphins while attempting to force his way into the senior team or be noticed by clubs ahead of the mid-season draft.

Playing in the midfield, Freeman picked up 40 touches in round one against Coburg, 42 in round two against North Melbourne and a paltry 35 touches against Aspley last week.

This week Frankston play Williamstown, which means three of his opening four matches will have been against standalone teams. But the following week the Dolphins play Footscray, who are sure to have a listed player or two in their ranks. No.1 pick from 2020, Jamarra Ugle-Hagan, is a Connors Sports client.

Freeman had a bit of fun with Snap Shot when asked how he would cope if and when he came up against clients on the field in 2021, playing along to answer the question with his tongue in his cheek.

“I try to give them a few pointers out there and tell them where to run and try to get them a few kicks,” Freeman said.

Rest assured Freeman is not playing VFL in the hope of a belated return to the AFL.

He’s just enjoying his time in the midfield at Frankston under Danny Ryan, who coached Freeman when he was at the Sandringham Dragons as a junior.

And the bonus is that he is more aware than most at what the players who walk through Connors Sports’ doors are going through each week. And, in many cases, capable of beating them.

Beware the written submission. It will cost you

This is a community service warning to all AFL clubs contemplating contesting a financial sanction from the match review officer by making a written submission to the AFL tribunal.

So far the AFL is running at 100 per cent in 2021 when it comes to written submissions. 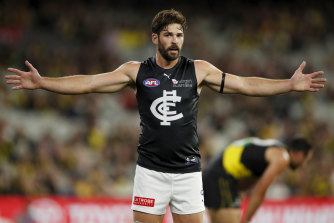 Levi Casboult had to pay up earlier this season.Credit:Getty Images

Carlton’s Levi Casboult eventually paid $3000 rather than $2000 after round six when he appealed a decision, while Hawthorn’s Sam Frost, Sydney’s Callum Mills and Geelong’s Isaac Smith had to pay an extra $500 each when their written submissions failed.

And it’s a trend too, because 11 of the 14 written submissions made in 2020 were upheld. Two successful appeals came in round 13 last year when Richmond pair Dylan Grimes and Nick Vlastuin were both cleared of fines for staging.

Hawthorn’s Sam Frost thrills and frustrates fans in equal measure with his fearless, and sometimes foolhardy, dash out of defence for the Hawks.

There is no doubting he is great to watch but he doesn’t appear to have won the hearts of the umpires, who are yet to award him a free kick after seven rounds while paying 14 against him.

Only one other player of the 135 who have given away at least seven free kicks in 2021 – Port Adelaide’s Boyd Woodcock – is yet to receive a free kick himself.

Woodcock has given away seven free kicks in the three games he has played this season, half as many as Frost.