Home » Rugby League » ‘So much more than that’: Daisy Pearce on finding fulfilment outside flag dream

A premiership medal has eluded Melbourne’s captain Daisy Pearce, widely regarded face of the AFLW, but the Dees star says her football journey has been “so much more than that” as she’s found fulfilment outside the flag dream.

Last season, when Melbourne made the grand final for the first time in competition history, a narrative was quickly created around “Do it for Daisy”. 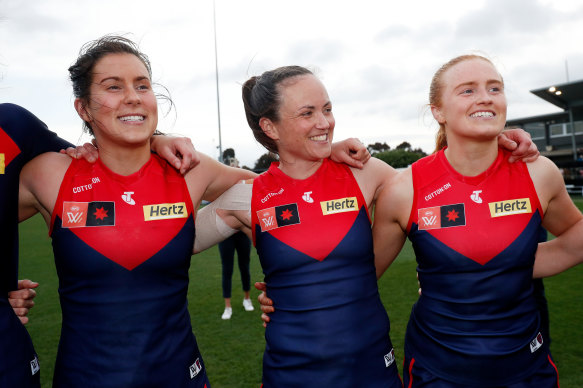 Fellow inaugural player Karen Paxman was even asked at a press conference during the week if there was a mentality among the players to get the cup for Daisy after last season’s 13-point loss to Adelaide in the grand final.

Paxman politely responded she felt her skipper could play for “forever” and that for her, and the other players who’d been there from the start, “to finish this season with a cup in our hands would be awesome”.

But Pearce, 34, says that while a premiership medal around her neck would be nice, she doesn’t need one for her career to be fulfilled.

“I mean, I want one. Eight good quarters of footy away from having one. But you got to get there first,” Pearce said on the latest episode of Good Weekend Talks – a “magazine for your ears” featuring conversations between journalists from The Sydney Morning Herald and The Age, and the people captivating Australia right now. 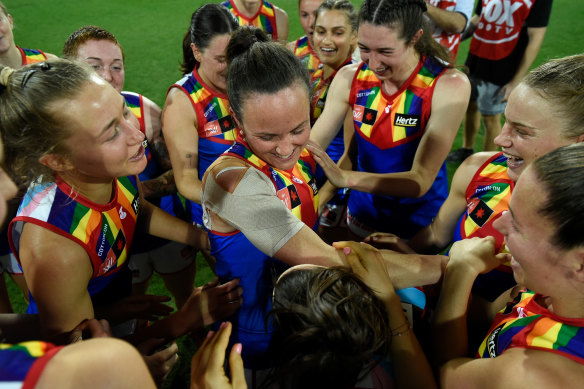 “It’s been so about so much more than that, like the relationships and the friendships that you make from footy. Not just at AFL level, but I think the whole way along.

“The beauty of AFLW footy is the amount of time you spend together, and the time and level that you can connect on, it’s been awesome. You know, people that just challenge and inspire every day, in all walks of life, not just to get better at footy, but just to be better in general, has been awesome.”

Pearce added she feels grateful to have seen the competition grow and being able to share it with her twins, Sylvie and Roy, now 4, who have grown up with 30 strong women around them as role models.

“Sometimes I look at my 18-year-old teammates and just have this envy that they’ve got like 15 more years of playing from this point. [But] I’ve kind of seen where it’s [the competition’s] come from and where it is now, even though it’s just kind of getting started … that’s so fulfilling.”

Melbourne have moved close to securing a grand old flag, building from reaching a semi-final, then a preliminary final and finally a big decider just four months ago in April and Pearce says “there’s a vulnerability in getting to a place where you genuinely think you could win it”.

“Because you let yourself feel that and then you leave yourself open to that hurt.”

The skipper said during pre-season the club had an open discussion about what the grand final loss felt like, where players could speak vulnerably and honestly. There, someone asked “All right, well, that’s how it felt, are you prepared to feel that again?”

To which said the answer was a resounding “absolutely”.

“It wasn’t that bad,” Pearce laughed. “Here we are all again, ready to kind of get back out there and get to work. So, can’t have been that bad.

“I think if anything, you’re not as afraid of losing because it’s like, the world didn’t end. Yeah, you still want to win one, but the sun came up, and we got back into it. And here we are.”

Pearce said the players, while they would love the ultimate team success, shifted focus this season to what they wanted to stand for, rather than where they wanted to finish the season.

She said this included being proud of the way they competed for their teammates and trying to make each other better “rather than worrying about playing the perfect game yourself”.

“I think at the beginning of the year, we were winning games and tracking OK, but we sort of hadn’t really found that spirit within our team. Like maybe, it was a bit of that narrative around wanting to go a step further.”

She said being so focused on solely a cup meant they were ticking boxes, but not walking off feeling proud of what they were doing.

“So we kind of did a lot of work on just trying to find what that was and how we wanted to feel walking off the field. So, we’ve come a long way. We’ve had a good month or five weeks of playing that kind of footy and, yeah, now it gets the ultimate test in a prelim.”

That preliminary final is against North Melbourne at Ikon Park on Saturday, where the Demons are the strong favourites. If they win, they’ll have another shot in the grand final, and if not, another season’s end after getting so close to the cup.

And for Pearce, she wants to added bonus of being on the waters at the league’s best and fairest next week.

“There’s no greater power move than drinking water at the W awards.”

Good Weekend Talks offers readers the chance to dive deep into the definitive stories of the day, exploring the events and individuals capturing the interest of Australians, through weekly conversations with an array of special guests. Listen to more episodes by subscribing to Good Weekend Talks wherever you get your podcasts.