Home » Stack’s back for Richmond in a promising VFL return

Richmond’s Sydney Stack made a solid return for the Tigers in his first match for the club since he and teammate Callum Coleman-Jones were sent home from the Gold Coast in September for breaching the AFL’s COVID-19 protocols when they became involved in a late-night altercation in Surfers Paradise.

The 20-year-old was mobbed by teammates when he kicked a goal in the third quarter after he received a pass from Coleman-Jones, who was also a strong performer for Richmond in the first VFL match of the season against Sandringham, St Kilda’s VFL affiliate. 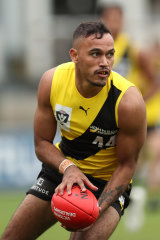 Sydney Stack plays for Richmond in the VFL on Friday.Credit:Getty Images

He spent time in jail over Christmas and then had to wait for a court hearing in March before being allowed to leave the state with the Tigers sticking by him and welcoming him back to the fold.

The Tigers won the match by 40 points with Coleman-Jones among their best. Jack Ross – who was the unused medical substitute against St Kilda on Thursday night – and Riley Collier-Dawkins also among Richmond’s best.

Maurice Rioli junior stood out with his pressure and evasive skills with the only downside being a shoulder injury to defender Ryan Garthwaite.

Sandringham struggled to stick with the Tigers in the second and third quarter with the Saints battling with a long list of injuries.