The much-awaited return of Kotoni Staggs saw Brisbane claim a thrilling 26-18 victory over the Sharks at Suncorp Stadium in a match which sparked fresh controversy over the role of the NRL bunker.

Sunday’s match saw Staggs pull on the Broncos jersey for the first time in 2021, after an ACL injury and an NRL-issued suspension, and he turned in a comeback performance which had even coach Kevin Walters smiling and giving a thumbs up to the camera at the end of the game. 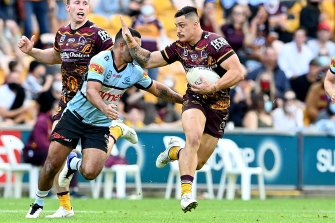 Kotoni Staggs makes a bust during his first game of the 2021 season.Credit:Getty

“It was an absolute circus because that was a forward pass every day of the week and twice on Sunday, because the officials missed it,” former Melbourne and Queensland great Cooper Cronk said in commentary.

“They awarded the try and then the bunker came into play. That’s the best cover-up I’ve ever seen in a long, long time.”

Despite the right call being made in the end, the decision will open a major can of worms for the NRL and will be a major talking point at football boss Graham Annesley’s weekly briefing.

The decision was made even worse by an earlier blunder from the on-field referees who failed to even call a penalty after Staggs was taken out without the ball in the hunt for a try. Ronaldo Mulitalo could easily have found himself in the sin bin.

Finally getting a chance to play at Suncorp this week, Mulitalo was fired up after being pulled from the Queensland side for Origin II at the 11th hour last week over eligibility issues.

He produced a stunning hit-and-spin offload to send Connor Tracey over for the Sharks’ second try of the day and took aim at Staggs with the pair mouthing off at each other throughout the game.

But Mulitalo’s fire died down for the second half. The winger was unable to chase down Tesi Niu in a foot race while scores were levelled at 18-18 to let the Broncos take the lead.

It was Tracey who ended up the Sharks’ star, scoring a double to keep his side in touch, but his effort was no match for the Broncos second-half desperation which yielded three tries in twenty minutes soon after the break.

The Sharks were hit with a late change after Matt Moylan injured his calf in the warm-up, with Braydon Trindall brought in as a replacement.

Tracey was also moved from the wing to the centres, with Will Chambers staying in Melbourne for the birth of his third child.