The forward-ruckman rated as a standout among players who missed last year’s draft is expected to nominate for the mid-season draft, allowing North Melbourne to pounce on a potential top 20 pick equivalent. 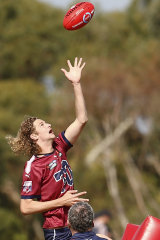 Sandringham forward and ruckman Jacob Edwards, who missed out on selection in the 2020 national and rookie drafts, is certain to be taken by North at pick one in the highly likely event that he nominates for the mid-season rookie draft.

Doubt had been cast about whether Edwards, 19, would declare for the mid-season draft, but sources have confirmed that the talented tall is expected to nominate before the May 25 deadline, in what represents a coup for the bottom-placed Kangaroos.

Rival clubs view Edwards as the standout young talent, with some observers rating him as a first-round pick if he went into the national draft in November, given his mobility and skills for a 203-centimetre tall.

That Edwards, who plays with the Dragons in the NAB League, is expected to nominate is an indication that he is happy to play with the winless Kangaroos, who have a need in both the ruck and tall forward departments.

In selecting Edwards, North would be taking a long-term view, based on adding a raw youngster who will not help the club win games this year, but who can become a valuable player in the years ahead, while giving up only a rookie position on the list and a relatively low cost in terms of money.

Players can nominate their terms over and above a six or 18-month contract, as long as those terms fit within the AFL rules.

Edwards would have the capacity to attract a longer contract extension, too, once he is drafted.

Sandringham has another tall who shapes as a probable mid-season recruit in Max Heath, also taller than 200 centimetres and who, like Edwards, is completing year 12 this year.

Mark Wheeler, the talent manager at Sandringham Dragons, said Edwards had the ability to play both as a ruckman and forward, with exceptional second efforts, and felt he would end up in the mould of an emerging Western Bulldogs ruckman with forward capabilities.

“He’s going to be along the lines of Tim English,” he said.

Edwards played for his school, Mentone Grammar, on the weekend and was concussed, which will prevent him from playing this week. The NAB League completes a four-week period without games this weekend – a hiatus that some recruiting officials at AFL clubs felt was unnecessary given that the teenagers in Victoria had been deprived of football for almost the whole of 2020.