He’s the quiet assassin slicing up rival midfields in all manner of ways. And while Western Bulldog teammates Marcus Bontempelli, Cody Weightman and Bailey Smith may attract more of the headlines and social media attention, Jack Macrae could not be happier.

“I am not too big into the media side of things. I think the media department are all pretty aware of that. It probably suits to have a few big names at the club … suits my personality, I can just worry about footy and not doing too much of the other stuff,” Macrae said on Tuesday. 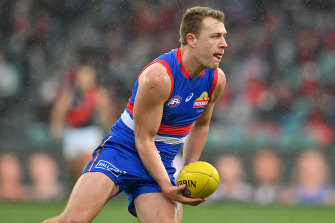 Jack Macrae likes to fly under the radar.Credit:AFL Photos

For a three-time All Australian, all in the past three seasons, Macrae, 27, doesn’t have the public profile of a superstar of the game, but there is no doubt teammates and rivals appreciate his standing in the game.

That standing was highlighted on Saturday when he had 39 disposals, 11 clearances and 11 inside-50s – call it football’s version of the triple-double – and along with Bontempelli turned the tide the Bulldogs’ way in a one-point win over the Brisbane Lions, sending his side into a preliminary final against Port Adelaide.

Only one other man has replicated that set of stats in a final – Essendon’s Joe Misiti in the 2000 qualifying final against North Melbourne when he had 41 disposals, 11 clearances and 10 inside-50s.

Macrae’s efforts came after his 36 touches, eight clearances and four inside-50s against the Bombers a week earlier in Launceston.

However, Macrae’s greatest challenge this season may come on Saturday if Bontempelli, nursing a twisted knee, is ruled out, or unable to have his typical influence.

Macrae said the Dogs had yet to formulate any plans in case Bontempelli was ruled out.

“‘Bonty’ is a true professional and he will give himself every chance to get up and play,” he said.

“But we are not preparing yet for him to not play. Probably towards later in the week, which way it goes, we’ll start having those conversations. We don’t rely on one player. As much as Bonty is an absolute superstar, we back ourselves as a group.”

The Dogs will hope for a lift from Adam Treloar, who had a season-low 10 disposals, including two kicks, against the Lions. A week after he had 28 touches against Essendon, the former Magpie did not have his first touch until well into the second term.

He has since been critiqued by the likes of Nick Riewoldt, Kane Cornes and Jonathan Brown for his poor body language when he failed to influence contests, amid debate whether he is not yet fully fit or is upset with his new role on a wing in what is a deep Bulldogs midfield.

Treloar has attended less than four centre bounces per game since returning from a syndesmosis injury in round 21, having averaged 10 per game through the opening 10 rounds.

“Obviously, there are so many spots in the midfield. I think the form that he was playing in, in the first 10 weeks of the season before he hurt his ankle was some of the best footy he has ever played,” Macrae said.

“He was just amazing for our team. I am backing him in to get back to that form. He has been a class player all his career – you don’t just lose that overnight.”

The Dogs have at least one selection issue in who should replace the concussed Weightman. Vice-captain Mitch Wallis, who has not played since round 17, is among the candidates, while Macrae said Jason Johannisen could slip into the starting 22 after a fortnight as the medical sub.

The Power and Bulldogs have split their results this season, the Power hanging on for a two-point win at Marvel Stadium in round 23.