If there is one team capable of giving the flag a shake from outside the top four, then Sydney could be it. The Swans began the season with none of their rivals believing they would play in the finals but are playing themselves into premiership contention after claiming another major scalp on Sunday.

Having already picked off Geelong and Brisbane, the Swans added the Western Bulldogs to their list after turning in a defensive masterclass at Marvel Stadium to win by 19 points – 11.13 (79) to 8.12 (60). 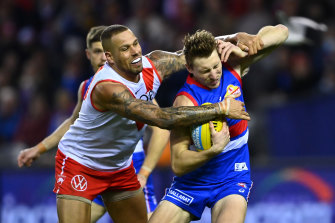 The result has cost the Bulldogs top spot on the ladder and also left the race for the top four wide open.

History has shown it is incredibly difficult to lift the cup from the bottom half of the eight but the Swans are emerging as a side the big guns will not want to face in September.

If results fall their way, the Swans may well finish the season with a plum spot on the starting grid.

Though their domestic situation is fraught due to Sydney’s escalating COVID-19 crisis, performances such as this should ensure spirits are high inside the Swans’ Melbourne camp. 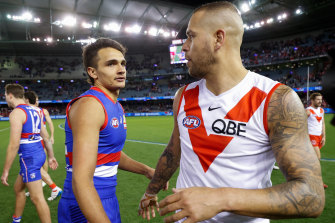 There are many aspects of the result which should please Swans fans. Lance Franklin had a quiet game, limited to just the one goal by Alex Keath, though his only major was the sealer. No longer can the Swans be accused of being Buddy-centric.

Though Luke Parker remains an important player, the baton is being passed to the next generation of Swans to drive the side.

Callum Mills was again influential in the middle. Tom McCartin was dominant in defence while rival recruiters must be wondering how they overlooked Jordan Dawson.

Number one draft pick Jamarra Ugle-Hagan had a few nearly moments on debut but struggled to adapt to the higher intensity of the elite level. He finished with just seven possessions and failed to score.

He was part of the Bulldogs’ problems but greater issues lay elsewhere. Caleb Daniel, Marcus Bontempelli and Bailey Smith racked up some big numbers but seldom were the Dogs able to inject any speed into the game to unsettle the Swans, who were manic in their pressure.

So well did the Swans guard the corridor, the Bulldogs were forced to attack out wide, which did not suit their forwards.

Missing Aaron Naughton, the Bulldogs’ forward line was rendered impotent. Josh Bruce may be high up the Coleman Medal charts but he had almost zero impact on the game against McCartin, who ruled the air in defence. 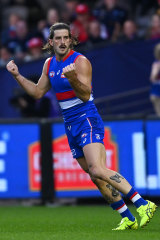 Josh Bruce celebrates a goal for the Bulldogs. Credit:Getty Images

The Bulldogs dominated the clearances (46-26), particularly out of the middle, but this was not reflected on the scoreboard as the Swans were able to win the ball back, keep it off their opponents and score.

Though Franklin could not get near it for much of the day, the Swans found other scoring avenues, with Dawson bobbing up for three goals.

The Dogs were a far more threatening force in the third quarter when they were able to get the ball to the outside, with highlights such as Bruce’s mark and goal proving rare.

Such was the control with which the Swans played they were able to get away without a traditional centre half-forward though Isaac Heeney provided a competitive undersized marking target.