One of Australia’s most powerful business figures has called on the AFL to mandate double vaccinations and is confident dissenting players would not win a legal challenge.

Tony Shepherd, the chairman of Greater Western Sydney and the former president of the Business Council of Australia, has urged the AFL to take a strong policy stand on the threat of coronavirus, backing stringent rules introduced by the Victorian government which come into force from Friday. 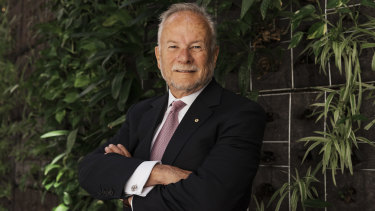 The AFL on Monday said its policy will be released shortly, coming after chief executive Gillon McLachlan has repeatedly encouraged all players to be double-vaccinated.

“The Giants are vaccinating all staff, all board, everybody, players, have to be double-vaccinated,” Shepherd said.

“I don’t care whether that’s AFL policy or not, that’s our policy. We are doing it for the protection of everybody. If people choose not to be vaccinated, that’s fine, but we can’t take the chance of mixing the vaccinated with the unvaccinated. 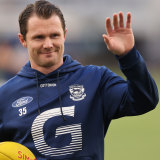 “I would like to see the competition take a stand … because that (non-vaccinated players) is unfair, unless they have got a medical reason for it. There will be .01 per cent of cases that have a good, strong medical reason for it, that is highly unusual amongst the fittest people in the whole of Australia.”

Industry sources say the majority of AFL and AFLW players have had at least one jab. Western Bulldogs, North Melbourne and St Kilda players, along with Collingwood skipper Scott Pendlebury and Geelong star Patrick Dangerfield, who is also the AFL Players Association president, have been among those to publicly support being double-jabbed.

Under the Victorian government’s policy, all AFL and AFLW players and football staff, as authorised workers, will need to have at least their first vaccine by Friday, and a second dose by November 26 to take part in pre-season training. Major corporations have also started to mandate vaccinations for employees, with auditing and consulting firm PwC the latest to do so on Monday.

“Our policy will be finalised and released shortly,” an AFL spokesman said.

As several of the world’s leading sports competitions work through their own policies, and the potential fallout, Shepherd doubted whether a dissenting AFL player would win a court battle under the terms of their contract.

“There are no legal issues there. I have looked at this very cautiously from a lot of views,” he said.

“The general feeling is, under the occupational, health and safety laws of Australia, particularly those in New South Wales and Victoria, Victoria is even tougher, you have an obligation to your staff and to your customers to ensure their safety. That means you have got to make the decisions to protect them.

“I will give you another example. Say, one of the players, or a couple of players refuse to be vaccinated and bring the disease into the club and half of the team goes down with COVID-19, and they sue us, we lose. We lose.”

There have been dissident sports stars across the world, including Melbourne-born, NBA basketballer Kyrie Irving, who is refusing to follow New York City rules and be jabbed. This means he cannot train or play home games for the Brooklyn Nets at their home venue, Barclays Centre.

Shepherd said he was unaware of any AFL administrator or player opposed to taking the vaccine.

“I haven’t heard a club that is objecting to compulsory vaccination. I haven’t heard anybody … unless the individual comes out and has some kind of weird idea,” he said.

“But if you are on a million dollars a year – up to you mate. You wouldn’t be paid … even the AFLPA couldn’t support that.

“I don’t mind if people decide to not get vaccinated, but you can’t take the chance of mixing unvaccinated with vaccinated people at this stage of the pandemic.”

The AFL, having dealt with two pandemic-impacted men’s and women’s seasons, did not disclose whether its policy will detail premiership points implications should a team, in the unlikely event, have to forfeit a match because of a major COVID-19 outbreak.