Home » Rugby League » Team of the week: Super League’s stand-out performers from Round 10 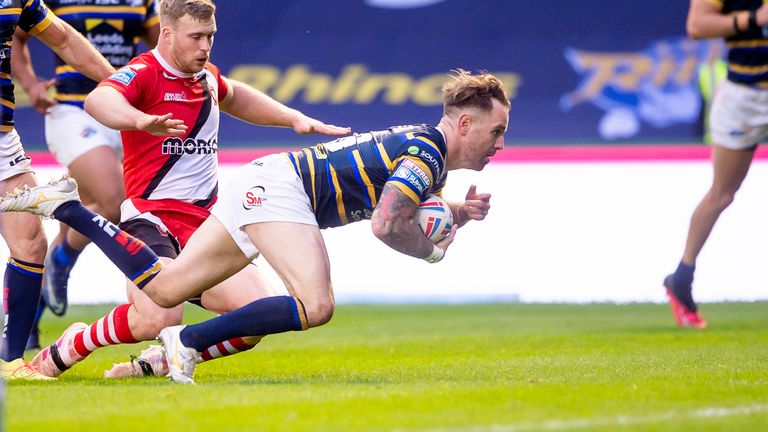 The decision to move Myler to the full-back role may have been born more out of necessity than anything else, but it is a role the 30-year-old has swiftly adapted to as was shown again in the Rhinos’ 50-12 win over Salford Red Devils.

The man who made his name as a half-back ran in a hat-trick of tries, covered 164 metres with an average gain of 11 metres per carry, plus made eight tackle busts and one clean break. 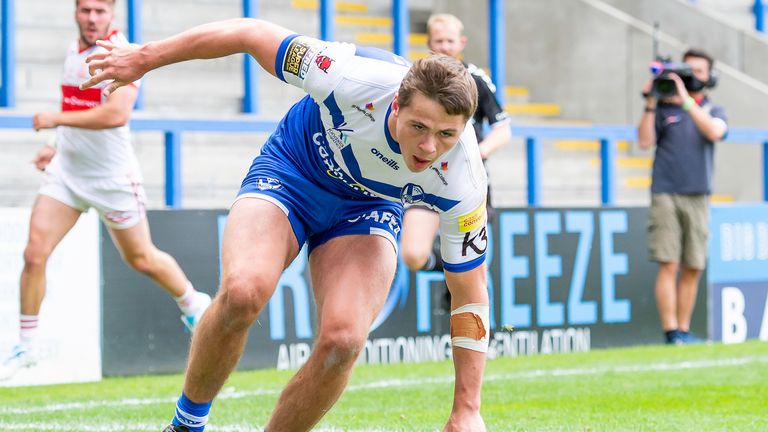 The 19-year-old’s first Saints appearance since the Super League season restarted saw him lead the way for the team with two tries in the 32-18 win over Hull Kingston Rovers.

Welsby covered a total of 166 metres with the ball in hand, plus made two clean breaks and seven tackle busts. The centre had a hand in three of Leeds’ nine tries against the Red Devils, being on hand to provide assists for them.

Sutcliffe produced some strong running as well, covering 174 metres for an average gain of nine metres and busting four tackles. 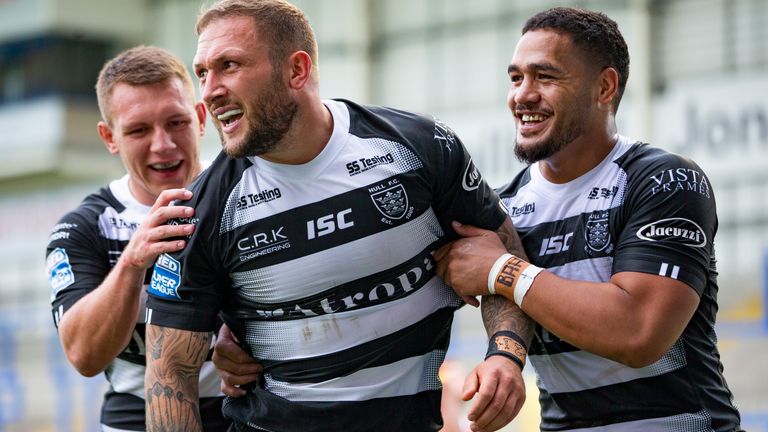 The 30-year-old was one of the driving forces as Hull FC picked up their first win under interim head coach Andy Last by seeing off Huddersfield Giants 31-12.

Griffin got over the try-line for the Black and Whites, along with making 143 metres with an average gain of eight metres and five tackle busts. 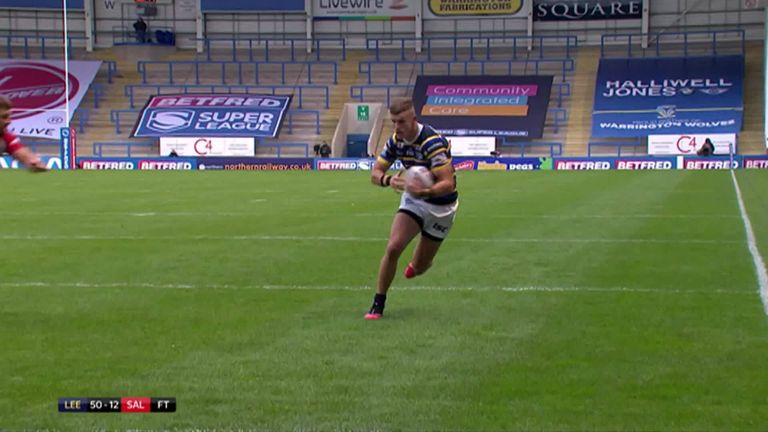 Another player who racked up a hat-trick of tries in the win over Salford, Handley took his tally for the 2020 season to seven tries so far and provided an assist as well.

The 24-year-old cemented his place as Super League’s top metre-maker too, covering 243 metres with an average gain of 11 metres, and made four clean breaks and three tackle busts. Austin was at his effervescent best as the Wolves saw off Wakefield Trinity 36-0 in Sunday’s behind-closed-doors showdown at the Halliwell Jones Stadium.

The Great Britain international led the way with a hat-trick of tries, provided one assist, and made 91 metres on the back of two clean breaks and nine tackle busts. Kelly’s 100th Super League appearance and his first since the competition’s return to action last month saw him play a starring role as Hull overcame Huddersfield on Sunday.

The Australian scored one try and set up another, plus proved a tricky customer with the ball in hand as he covered 146 metres, made 10 tackle busts and two clean breaks. Bullock’s first spell at Wigan as a junior saw him play initially as a winger, but the intervening years have seen him transform into a powerful prop and he showed that in the 30-22 win over Castleford Tigers.

Along with scoring a try, the 27-year-old carried for 110 metres, made two tackle busts and produced a strong defensive effort with 44 tackles. The 34-year-old remains a key member of the Saints team and was in the thick of it again on Sunday as they defeated Hull KR.

Roby was on hand to assist two of his side’s tries against Rovers, gained an average of seven metres per carry, made two tackle busts and effected 29 tackles on the defensive side. The Poland-born prop was at the forefront for the Rhinos in the forwards as they overcame Salford, adding one of his side’s tries as well.

Oledzki covered 175 metres with an average gain of 12 metres, made one clean break and three tackle busts, and came up with 38 tackles in defence. The second row was a huge running threat all day long against Wakefield, giving the Wolves plenty of go-forward by making 235 metres with an average gain of 20 metres.

That included two clean breaks and three tackle busts, with Currie capping the display with a try and making 29 tackles as well. One of the outstanding players in Super League so far this season, Farrell was again at the heart of things for Wigan as they held off Castleford on Saturday.

The back row scored a try and set up another, covered 160 metres with an average gain of nine metres, bust out of nine tackles and made 29 tackles on the defensive side. 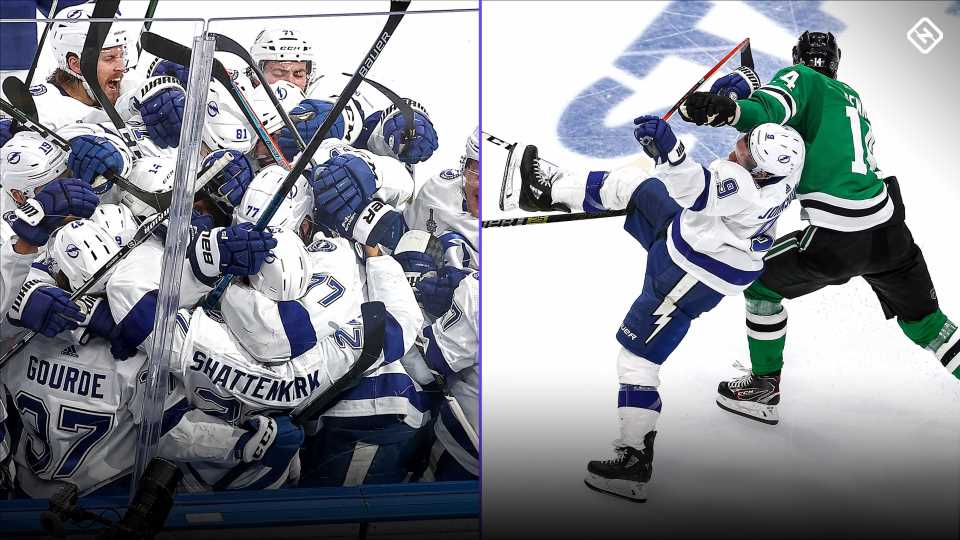 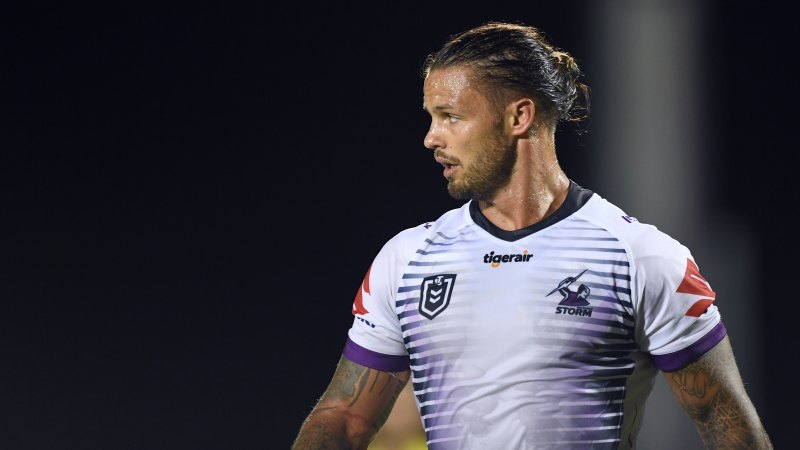