The noise around Anthony Griffin keeps getting louder. The coach is safe … for now.

The no-show from 27 of the top 30 NRL players at Tuesday night’s end-of-season club presentation at Pyrmont’s Doltone House speaks volumes to the narrative that St George Illawarra is an unhappy camp.

The club will brush it off as a simple scheduling mishap, even though the players were told of the presentation night around six weeks ago.

“We had to wait until the completion of the NRLW season to make sure everyone had the opportunity to celebrate their seasons,” Dragons chief executive Ryan Webb said.

“When you do this it meant our men’s team were three to four weeks into their leave period so many had gone on their holidays. It’s a tricky situation for a lot of clubs with both NRL and NRLW teams will have to work out a solution for.”

It’s a valid argument that many players are now off-duty and have taken some well-deserved time off to go on holidays before returning to training on November 7. Some are on the other side of the globe preparing for the Rugby League World Cup. 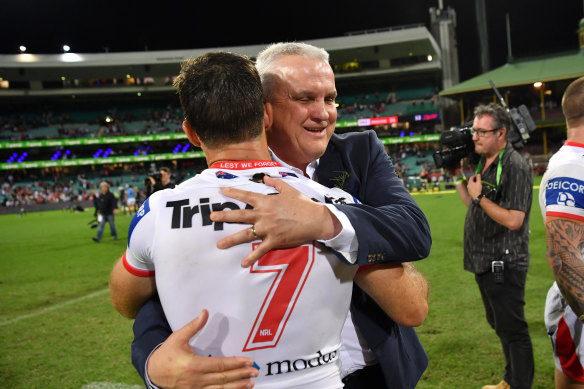 However, the Herald has been told many were at home and chose against attending an event that is a requirement of employment at most clubs in the NRL. Most of the club’s NRLW squad were there.

Only Zac Lomax, fringe first-grader Michael Molo and the winner of the club’s player of the year award, Ben Hunt, were in attendance from the NRL squad. It wasn’t a requirement to attend.

Although it gives an insight into an unrest within the camp. It comes as young guns Jayden Sullivan and Tyrell Sloan are demanding releases to the Bulldogs and Dolphins respectively.

Sloan, in his release request, stated that he wasn’t enjoying the environment and couldn’t see it improving. The Dragons, like they are expected to with Sullivan, rejected his request. The latest request from Sullivan comes as a direct result of Hunt’s re-signing on Wednesday, blocking the youngster’s path. 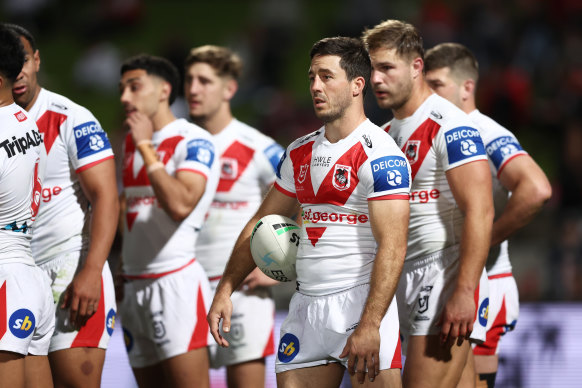 It has been a long season for St George Illawarra Dragons fans.Credit:Getty

The Dragons have gone all-in on Hunt. His form in 2022 was the best since he arrived at the club, who have parted ways with close to $6 million over the past five seasons for one finals series, in 2018, during that time. Outside of that, the club has finished 15th, 11th, 12th and 10th with Hunt at halfback.

Calls for Hunt to move to hooker, where he has dominated for Queensland and been selected by Kangaroos coach Mal Meninga for this month’s World Cup, have fallen on deaf ears.

The late-season clean-out of Griffin’s assistant coaches Mat Head and Peter Gentle, wreaks of a coach under pressure maneuvering to delay what seems like the inevitable.

One can hardly blame Griffin for looking over his shoulder, especially considering the Herald’s revelations in August that a particular Dragons director reached out to Cameron Ciraldo’s representatives last month to gauge his appetite in taking over from Griffin in the not too distant future. 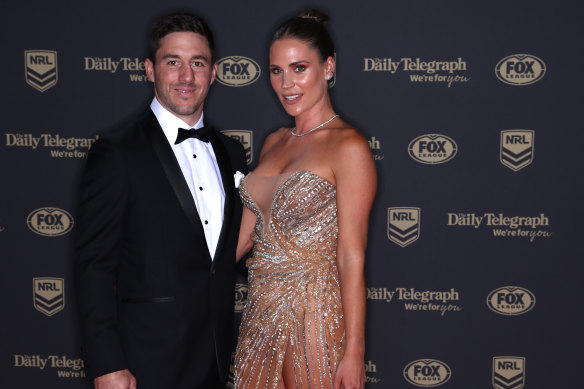 Griffin was signed at the start of 2020 as Paul McGregor’s replacement because of Griffin’s acute focus on defence and discipline during his time at the Broncos and Panthers.

This year, St George Illawarra missed more tackles than any other club (938), averaging four more missed tackles per game than wooden-spooners the Wests Tigers. They are conceding almost four points per game more than they did with McGregor at the helm.

As for the emphasis on discipline, the Dragons finished the year with the most sin bins and send-offs in the NRL with 12 players spending time on the sideline mid-game.

Not to mention the complete disregard for the coach’s instructions in the hours leading up the infamous ‘BBQ-gate’ scandal at Paul Vaughan’s house last year.

When it comes to junior development, the Sullivan and Sloan issue is glaring. Griffin debuted only Michael Molo and gave a 29-year-old Jonathon Reuben a single game in 2022. He did stick with Talatau Amone through some lean patches, and Cody Ramsey showed some green shoots at fullback later in the season.

A criticism of Griffin from some of those who have worked with him is a tendency to wipe players, rather than educate and improve them, once he sees a significant weakness or deficiency in their game.

The Dragons are applying the opposite approach when it comes to the coach. They’re giving him the time and resources to improve as a coach, despite the club finding itself in an all too familiar predicament praying for the tide to turn.