Home » The conversation that helped turn Mitch Robinson’s season around

Brisbane Lions winger Mitch Robinson, who kicked four goals and gathered 30 possessions in a best-on-ground performance against Greater Western Sydney, said on Tuesday that a chat with coach Chris Fagan after the round two loss to Geelong was critical to his resurgence in form.

Robinson had been down in form in the first two weeks of the season, and Fagan pulled him aside while the Lions were in lockdown in Melbourne. 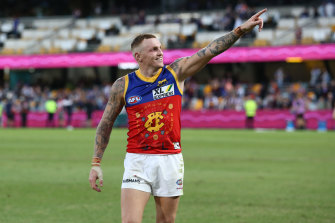 “We just had a pretty open and honest conversation. I’ve got that relationship with Fages; we can be honest to each other, and we spoke about how I’m feeling, how my body was feeling,” he said.

“I had a little bit of stuff going on off-field at that time, so he was just checking in on me, making sure my head’s in the right spot. We talked about post-career, had a big conversation about how that all looks, and it was really refreshing.”

Robinson turns 32 next week, and is out of contract. “I’m not under any illusions,” he said. “He was saying, ‘is that weighing on your mind, how are you going?’”

“I wasn’t saying I was going to retire or anything. It was more about how I was feeling in body and mind, he was trying to get to the bottom of that and see how I was going.

“I got a lot off my chest, and he talked me through some stuff and I’ve been playing some good footy since. He wasn’t worried about the touches I was getting, it was more how I was going off-field.”

Robinson has played 221 games, 100 of them for Carlton before crossing to the Lions with his career at the crossroads at the end of 2014. Previously a pack-breaking inside midfielder, he said the move to the wing had rejuvenated his career.

“I only had three contested possessions on the weekend, so wasn’t really crashing bodies and packs, I was sitting on the outside,” he said. “So I feel I can get a bit of longevity out of my new role, it feels good.”

He joked that he had spoken to club CEO Greg Swann after the weekend’s performance about renewing his contract.

“I went up to Swanny and said, ‘what’s going on mate?’ … No, that will happen in due time. If it does, it would be great to get it done sooner than later. But the club’s got such good young players, I’m just loving seeing them commit to the club.”

The Lions, currently third on the ladder, will play Melbourne – sitting on top with 10 wins from 11 games – on Friday. The venue, shifted from TIO stadium in Alice Springs, is yet to be announced.

“It’s going to be huge for us. We get to see where we’re at as a footy team, and all the boys and coaches are very excited.”