Home » Rugby League » The upshot of the Dangerfield bump

Patrick Dangerfield is all but certain to be suspended for at least two matches for a bump on Jake Kelly that resulted in a head clash that knocked the Adelaide Crows defender out cold.

While predicting tribunal outcomes is a fraught exercise and there’s always the possibility of leniency, the most likely scenario, based on the AFL’s rules on players who bump, is that the Geelong champion will cop a three week ban.

Dangerfield is stiff with his timing, both in relation to Kelly’s body position and in the historical context. Had this happened in 2018, Dangerfield would stand a strong chance of averting suspension, as then Hawk Ryan Burton did when he executed a bump on (now Dangerfield’s teammate) Shaun Higgins, which also caused a head clash that put Higgins in hospital. 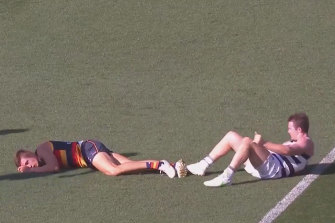 The Dangerfield-Kelly incident does not kill the bump stone dead, as some will assert. But it does show that the high-speed bump – the bump in which the players meet at some velocity, due to one player’s choice – can’t be executed without a massive risk of suspension.

Today, a player can only really bump at close quarters, without picking up speed. In cricket terms, you need to approaching the bump like a slow spin bowler, not off a fast bowler’s long run-up. They must be coached accordingly – bump only in confined spaces, when contesting the footy and never when accelerating.

The Burton-Higgins clash was one of the catalysts for the AFL changing the rules on bumps that cause head clashes. In 2019, the AFL decreed that “head clashes will now always (my emphasis) be considered a reasonably forseeable consequence arising from a bump and the previous provisions removed”.

From 2019, the player who “elects” to bump (which makes it sound like voting, rather than reacting at split seconds) would be in strife if there was a head clash that injured the other player. The only get-out clause is that the bumping player is contesting the ball, or if the bump was caused “by circumstances outside the control of the player”.

Patrick Dangerfield will face the tribunal for this bump on Jake Kelly.

When Higgins was cleaned up, somewhat inadvertently by Burton’s bump, there were howls of outrage. Steve Hocking, defending the decision to let Burton go unpunished, said the very existence of the bump was on the line.

“If we suspend him for that we are throwing the bump out of the game and I’m not sure we should be doing that,” Hocking said.

Dangerfield is being treated differently to Burton, in large part because of the enormous focus on head trauma and the long-term impact of concussions on players – a story that is only just beginning and will doubtless play out in real courts and legal settlements.

It is not reasonable to be knocked out when you are not even contesting the ball, even if the bump was just a fraction late.

We tend to, in football, focus on the player who’s facing the charge or prospective suspension, rather than the victim.

Consider the incident from Kelly’s vantage: he’s gained possession, he’s disposed of the football (just) and then – with little or no capacity to defend himself – he’s been knocked unconscious and suffered a facial injury.

It is not reasonable to be knocked out when you are not even contesting the ball, even if the bump was just a fraction late.

Dangerfield is unlucky, in that while he picked up some speed, the impact of the collision – graded severe by the match review officer – was partly caused by the angle at which the players met. Kelly was travelling in almost the opposition direction.

So, under the more draconian rules, the tribunal has little choice but to suspend Dangerfield for at least two games and I’d be betting on three.

I doubt Dangerfield can argue that he did not elect to bump, although his camp might mount that argument and he’s saying he didn’t have a choice. His best case for limiting the damage to two weeks is to argue that the impact was high, rather than severe, despite Kelly’s injury.

The AFL zeitgeist, too, is against Dangerfield, who, as AFL Players’ Association president, knows well how the spectre of concussion haunts the game and makes any bump harder to execute than a torpedo from outside 50m.