The first is to his wife Ruby and two infant children, and the second is to his broader Melbourne family.

The former has been enduring the hardship of lockdown, while the latter has braved two decades of a failing team and will now, cruelly miss the potential premiership pay-off. 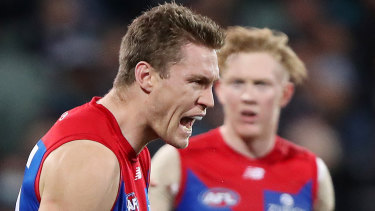 Tom McDonald is playing for his wife and two kids as well as the entire Demons family on Saturday. Credit:AFL Photos

“Bella is in childcare and Ruby has a bit of help from her mum, who can help her out with Leo. So, they’re going OK, but they’re certainly sick of lockdown and ready for a bit more normality.

“The message to the family has been: just 10 more days and we should be home. Hang on for a little bit longer, and then we’ll be back together. In the meantime, Ruby is just telling me to make the most of my opportunity. Make it worth it, and go out and win.

Of all the Melbourne players lining up against the Western Bulldogs on Saturday, none have played more games and thus seen more defeat (skipper Max Gawn has been there one year longer, but McDonald has played more games).

McDonald made his debut just weeks after Dean Bailey was sacked. Simon Goodwin has been his fifth subsequent coach. McDonald’s first 39 games yielded only nine victories.

And so, as the most seasoned Demon and a family man, McDonald feels the pain of separation, and of the fans’ separation from this grand moment.

With Bella and Leo both under the age of two, life in lockdown for Ruby is brutal, as it is for any Victorian parent with infant children. 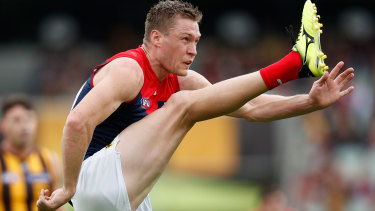 Tom McDonald in action earlier in the season against Hawthorn.Credit:AFL Photos

“I just want to see their faces every day and I ask for more and more videos every day of the kids doing fun stuff,” McDonald said.

Win or lose on Saturday, McDonald and his other teammates with families will return to Melbourne in the middle of next week, with exit interviews and medicals scheduled for Monday and Tuesday in Perth.

While younger players are likely to remain in Perth or fly to other parts of Australia with relative freedom, rather than return to an extended lockdown, McDonald, clearly frustrated by the restrictions in Victoria, will hasten home.

He feels, too, for members of his wider Demons family – those untold thousands of Melbourne supporters who have endured sustained failure from long before McDonald was drafted.

“It’s really frustrating to see what’s happening in Melbourne and how it’s being run. I just feel for everyone back there and I’m going to be back there soon.

“You look at what life is like over here and it’s very different. While I don’t agree with everything that Perth has done, they’ve obviously got some things right.

“It would be extra special if you were back at the MCG and people could see it like they normally would, so there’s a little bit of bitter-sweetness to it.”

McDonald wants these long-term Melbourne fans to be proud of their club and what it has become.

“Win or lose, I hope they can see the change that has happened at the football club, culturally and in the performance on the field,” he said.

“I hope they’re proud of what they watch each week.

“Whatever happens, I think they can see a transformation of the whole club, not just what they see on the field, and that they’re proud to go for Melbourne again.”