Preparation for a final looks very different for North Melbourne’s Jess Duffin in 2021.

As a top-order batter for the Australian women’s cricket team, the 31-year-old would get a good night’s sleep and have an easy morning before a World Cup final – she won four and was player of the match in two. 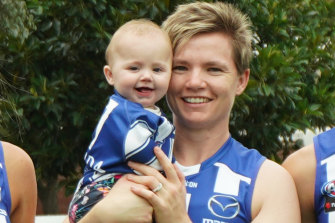 In the lead-up to Saturday’s qualifying final against Collingwood at Victoria Park, Duffin has been busy with her teething nine-month-old daughter Georgie and moving house with husband Chris while living with her parents.

“Game day varies, when Georgie’s up, I’m up and that can be anytime from 5am to 8am. I’ll take her for a walk in the morning. It’s about her and I don’t really think about the game until I drive to the game,” she told The Age.

“The 3.10pm start is perfect, she’ll be there and might even sneak a sleep in at half-time.

“To have Georgie there, even though she doesn’t know what’s going on, is special. After the game I go and see her, she has a big smile on her face and you forget about the game straight away.”

A big-game performer, Duffin has a wealth of finals experience. 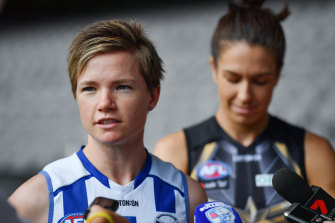 Duffin has a wealth of big-game experience.Credit:Joe Armao

“Finals are what it’s all about. The best players show why they’re the best in finals, no matter the sport. I like it because for me it’s a challenge to play your absolute best when the intensity goes up,” she said.

“I feel more relaxed playing footy. I still get the same nerves and that’s good, it shows you care. I found it really, really difficult to get out of my own headspace in cricket but with footy you can always relate back to the team.

“In footy I feel like when you make a mistake you have multiple opportunities to try and fix it but in cricket if you’re out, you’re out and if you’re taken for a lot in an over it’s hard to come back from that.”

Duffin’s last final was in December 2019, a Premier Cricket Twenty20 decider for Prahran at the Junction Oval. She was 10 weeks pregnant.

A few months later she was in the stands of the MCG as a spectator when Australia claimed the Twenty20 World Cup.

“I’d had some conversations with the selectors around whether I was available for selection for the World Cup,″⁣ Duffin reveals.

“There were a few bridges I would’ve had to get over, there was an Australia A series against India in the December. They asked me if I was available but at the time I couldn’t tell them I was pregnant, but I knew I was in their sights.”

Duffin welcomed Georgie last June and with Melbourne in lockdown was unable to attend key appointments as she, with the Kangaroos, began planning her return. 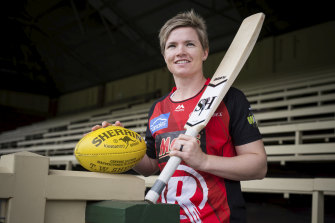 Dual-code star Duffin also plays cricket for the Renegades in the WBBL.Credit:Paul Jeffers

“Playing [after having Georgie] does feel a bit different. It’s a bit more difficult when you’re not sleeping, trying to get yourself ready for training, training then getting home at 10.30 at night and then you start again the next day. You feel a little lethargic,” she said.

“I’m lucky with Chris and the support of my family I can kind of catch up at different stages of the week.”

Duffin will play cricket for the Melbourne Renegades next summer and hasn’t closed the door on representing her country again.

“How many years I’ll continue to play cricket for I’m not sure but I’m excited I can show Georgie later on I was playing when she was 12 months old,” she said.

“I think that’s [playing for Australia] past me, just my age and it looks like the dynamic of their squad now is a lot younger than me, [but] I won’t ever rule it out. I think if you rule something out it obviously makes them think you’ll never be available again which is not what I ever want anyone to think. I’ll always keep doors open because anything can happen in sport.”

“It’s exciting, we’re in another final and playing against Collingwood who are in some really good form. We have to be good enough to beat the best and they’re our first test.”