Home » Rugby League » ‘Typical Roosters’: Why the booing of Latrell Mitchell will be quieter

The booing of Latrell Mitchell will be much quieter next Sunday as the Sydney Roosters face the embarrassing scenario of being outnumbered by South Sydney fans at a home NRL final.

The Roosters won the right to host their fiercest rivals in a sudden-death elimination final at Allianz Stadium with Friday’s 26-16 victory.

Roosters supremo Nick Politis declared during the week “the Roosters are the only people that belong” at the new Moore Park venue, and the Rabbitohs have made it well known they want to make it their new base too, as tensions between the old foes bubbled away. But the Roosters are set to be significantly outnumbered when the sides clash again next weekend.

Roosters and Rabbitohs members will have the chance to buy tickets on Monday, 24 hours before they are made available to the public. Souths officials happily pointed out they had 31,000 members compared to the Roosters’ 18,000.

Having the bulk of fans inside the new ground will mean there will be less ridiculing of Mitchell, who was booed every time he carried the ball on Friday night. The jeering became a deafening crescendo when he was sin-binned in the second half.

Roosters fans have not forgiven Mitchell for breaking Joey Manu’s cheekbone last year, nor the manner in which he left the club following their 2019 grand final victory. There were similar scenes in round two when Mitchell was given a warm unwelcome at AAMI Park by Melbourne locals. 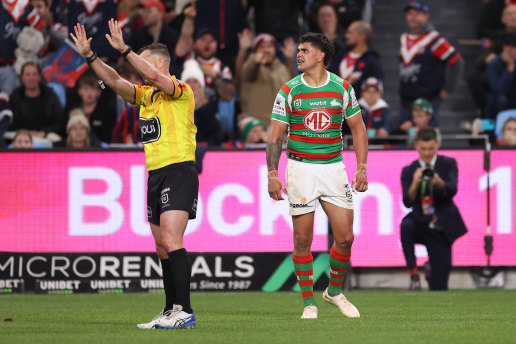 Latrell Mitchell is sent to the sin bin on Friday night.Credit:Getty

“How some Roosters fans decide to treat a two-time premiership winner is up to them,” Souths chief executive Blake Solly told The Sun-Herald. “But Souths fans and members absolutely love Latrell and cannot wait to get out there next Sunday. We want to turn the stadium into a sea of red and green and drown out the minority.”

Even Souths legend John Sutton could not help himself, taking a potshot at the Roosters and their smaller supporter base.

“Our fans actually show up to games; the Roosters needed a marching band when they ran on to the field the other night, just to create some noise,” Sutton said.

“As for booing Latrell, they were always going to come out and try to put him off his game. Typical Roosters. I didn’t expect anything less from their fans.” 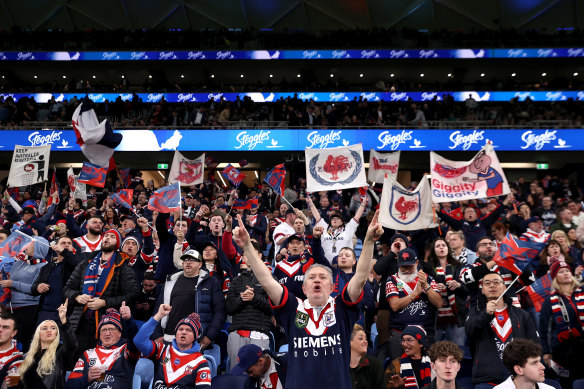 The Roosters faithful were in fine voiceCredit:Getty

While Mitchell enjoyed being the villain – and even posed with a few Roosters fans for photos after full-time – Souths officials thought there would have been a bit more respect shown, especially to a player who helped win the Bondi club two titles.

The Roosters did an excellent job early with Mitchell by pinning him deep inside his own half and having three and four defenders rush up on him with every carry. Coach Jason Demetriou, who watched the action from home while in COVID isolation – and quickly picked up on the booing through his laptop – said there was an easy way to avoid a second Mitchell ambush.

“It’s all pantomime – it’s what makes sport great,” he said. “We have to work harder in other areas to minimise their ability to [limit Mitchell]. That’s the challenge and that’s finals footy.

“There will be times when teams get the ascendancy, and you need to bite down on your mouthguard and get through it. You can’t expect to play the top teams and not be put under any pressure.

“Their play-the-ball speeds were quick at the start of the game, and they were kicking from the front foot. We need to ride that out.

“They’re a very good side, they’re playing great footy and are confident, so we know what kind of challenge is coming.”

“The booing of Latrell was all in good fun, he’s an ex-Rooster, and every time he got the ball they let him know,” Arrow said.

“I’m sure he enjoys that part of the game. We play the game for the fans. It had a bit of an Origin vibe. We just weren’t good enough.

“We need to win the physical battle next week. I thought they bashed us in the first half, they won the middle third and then eventually the game. It’s a credit to them because they were up for the occasion.

“The positive we can take out of it is the way we fought in the second half.