Essendon District Football League umpires have voted to boycott all games this weekend unless the league agrees to pay umpires what they were paid in 2019.

That’s despite EDFL umpires being paid more than any other semi-professional metropolitan league in Melbourne.

EDFL chief executive Ian Kyte declined to comment on the dispute, other than to say the matter would be handled internally. 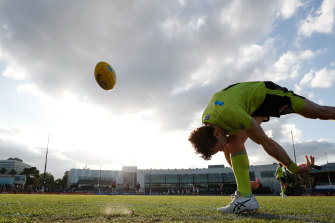 EDFL umpires have voted to boycott games this weekend over a pay dispute.Credit:Getty Images

But EDFL Umpires Association president Brendan Dye says a return to the 2019 pay scale is the fair outcome for umpires and they’re seeking a resolution by this weekend.

“[The league] are well aware, as of discussions last week, we’re in a serious situation that umpires possibly won’t be umpiring this week,” Dye said.

“We’ve got overwhelming support and we’ve discussed and voted upon [the boycott] amongst our members.

“The last couple of weeks, it appears the league have delayed making a decision either way. Even though they have met with the clubs, it continues to drag on so we really just want to have a decision one way or the other.”

Umpire pay was automatically cut by 11.25 per cent this season and in a year which the EDFL’s umpire numbers have dropped by 20 per cent, from about 500 umpires to 400.

Premier Division senior field umpires are being paid $146 this season, down from $164 a game in 2019. Payments decrease for reserves, women’s and junior football umpires.

Only the Victorian Amateur Football Association pays its umpires better, with Premier Division senior field umpires earning $168 a game following a slight decrease from 2019. One VAFA source says it has not received an influx of former EDFL umpires.

But Dye says the number of Saturday EDFL games held in 2021 is up on 2019 and with less umpires at their disposal, umpires are forced to stretch themselves further than ever before.

A mother of an EDFL umpire, who asked not to be named to protect her child’s identity, said the work level these kids were taking on was much greater than the two hours from siren to siren.

Some kids are umpiring two junior games on a Sunday and being called upon to umpire open-aged reserves football on a Saturday also. The commitment to be an umpire also includes training at least once a week, arriving early to matches and staying back to complete paperwork and occasionally attend tribunal hearings.

“We’ve seen teams having to supply not only their own boundary and goal umpires but also field umpires,” Dye said.

“We haven’t had this problem before, yet this year we are really struggling. We know that umpires have left and gone to other leagues, we know that for a fact, but we also know each year a lot of umpires drop off in seniors and juniors and it’s a matter of trying to replace those umpires.”

But Perrone says it’s the umpires who should come to the table and negotiate a fair deal.

“Everyone else has had a pay cut in life,” Perrone said.

“It’s probably only short-term; it’s not that they want to cut it permanently or cut anyone’s food off the table. People haven’t worked for a whole year nearly. It’s 2021, you’ve got to work with the times as it changes with COVID.

“I know myself, we’ve lost a lot of money with sponsors … everyone’s got to understand we’re all on the same page here, let’s try and work together to get it over the line. That’s my view anyway.”