Home » Rugby League » ‘We are still right in this’: Pies stars back their premiership credentials

Losing by just a kick to the top team in Geelong is evidence of how close Collingwood are to the competition’s best, and proof they’re right in the premiership hunt despite the narrow loss, according to the Magpies’ stars.

“A hundred per cent we are right in this. We were six points off beating the top team everyone said is the favourite,” veteran Steele Sidebottom said on Monday.

“If you heard the message we had going into the game, we have earned the right to be where we are, and I think, barring the result, we had a great performance on the weekend, and we lost by a goal to the best team that finished on top of the ladder. 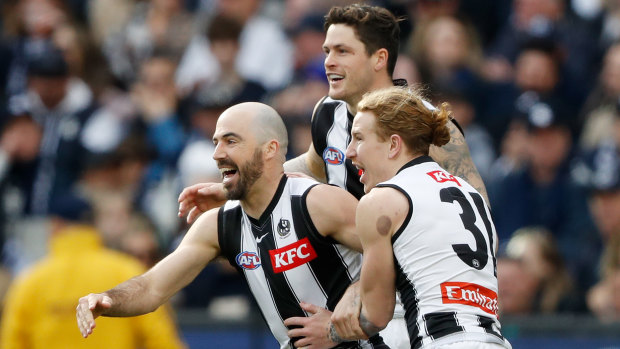 Steele Sidebottom celebrates a goal against the Blues earlier this season.Credit:AFL Photos

“We take huge confidence coming from this game and what we can do still, and we’ll get today out of the way and tuck into Freo straight away.”

Ruckmen Darcy Cameron and Mason Cox agreed with Sidebottom, saying the tight contest was a validation of the Magpies’ credentials.

“I think it reinforces that our brand stacks up against the best team in the competition,” Cameron said. 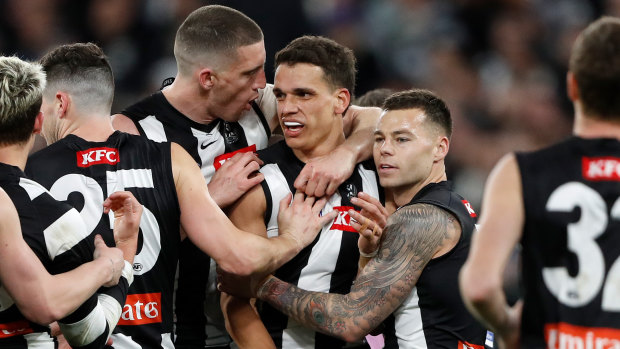 Darcy Cameron and Jamie Elliott hug Ash Johnson in celebration of his goal during the qualifying final against the Cats.Credit:AFL Photos

Cox said Collingwood’s confidence was unaffected by the loss.

“Geelong has been touted as the premiership favourites all year, and we were with them to the very end of the game. They won by one kick. The ball bounces one way or the other, and we might be in front,” Cox said.

“I don’t think there’s any shock to our confidence whatsoever.”

Sidebottom said the pressure in the game was intense throughout and “one of the hottest games I have played in.”

The dynamic Jordan De Goey, who was one of the Magpies’ best in the loss to Geelong, is expected to play against Fremantle after only sprain his shoulder. Scans confirmed no major injury to the AC joint hurt in a collision early in Saturday’s game.

Jordan De Goey, who starred for the Magpies, is tackled by Patrick Dangerfield.Credit:AFL Photos

Forward Ash Johnson, who spent the end of the game on the bench with a cork to the hip, had also recovered well and would be certain to play, despite being likely to have a light week on the track.

“He [De Goey] is huge for us,” Sidebottom said.

Collingwood will need to replace Taylor Adams in the team after he ripped his groin from the bone and will miss the rest of the year.

Sidebottom said Collingwood long stopped talking about the fact the team had come from second bottom last year to rise to where they are now, and just spoke of how they had earned the right to be there.

If there was a sense of the club being lucky to make the top four from all those close wins, Sidebottom said, then the intense close contest with the top side that is the premiership favourite had only further validated that Collingwood had earned their right to be where they were in the premiership hunt.

“The position we are in, we have got a second chance,” he said. 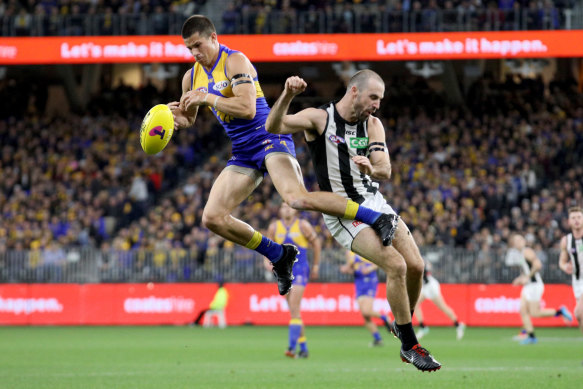 “I got flashbacks a little bit to 2018 when we lost over in Perth (in the qualifying final by 16 points after leading West Coast by 10 points at the last break). And although we lost, and clearly the boys were tipping in (in Saturday’s game), you have got to move on pretty quick.

“I would be surprised if there are teams out there that don’t want to have a wining mentality, but his [coach Craig McRae’s] comments were very positive after the game: we lost by a goal to the top team, who a lot of people said are going to take some stopping.

“We take a lot of confidence out of that game and will continue to say it – we can’t wait for Fremantle, to get the opportunity we have in front of us, and what we hope is another packed MCG on Saturday night.”