Collingwood football manager Graham Wright has defended the Magpies’ game style after it came under fire following the Magpies’ goalless first half against Geelong last Saturday.

Despite being close on the scoreboard against the Cats, Wright conceded on SEN on Thursday that the eventual 10-point margin flattered them. 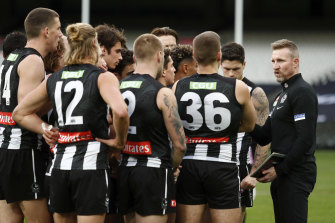 The Magpies have only won two games in the first 11 rounds.Credit:Getty Images

The team’s performance is being intensely scrutinised as Collingwood coach Nathan Buckley is out of contract at the end of the season with Wright part of a group assessing his future.

The judgments are being made while Jeff Browne attempts to overthrow the board and supporter David Hatley collects signatures to force an emergency general meeting.

Wright said Buckley was coaching to win games with a team that was much more inexperienced than last season and had lost some key players to injury, and it was the coach’s prerogative to do that in the manner he felt right.

“He has absolute full say in the way he wants to coach the team,” Wright said.

“He has basically got the right of way to do exactly as he likes.”

Collingwood secured Ash Johnson and Aiden Begg in the mid-season draft and Wright conceded there was still some minor repositioning of the salary cap necessary although club sources say last year’s brutal cull of several players made the required work minimal.

“There’s still a hangover in relation to the salary cap. We’ve still got some issues we’re dealing with there, but they’re not insurmountable at all,” Wright said.

“There hasn’t been any conversation at the moment about how we look at the list from an end of year perspective and exactly what we’re going to do.”

Collingwood hope to land Nick Daicos as a father-son recruit in the 2021 national draft and have already traded out their first draft pick in the expectation it would be used up as points to acquire Daicos.

Wright said they still aimed to make a decision on Buckley in the back-end of the year with the board understood to be united in their approach to that process.