North Melbourne captain Jack Ziebell says the Kangaroos will use calls they should lose their Good Friday game to spur them on against the Western Bulldogs on Friday.

The Kangaroos led the charge for Good Friday football and involving the Good Friday Appeal in the match, but they faced questions this week about whether their struggles on the field should mean other, more successful teams play in the match instead. 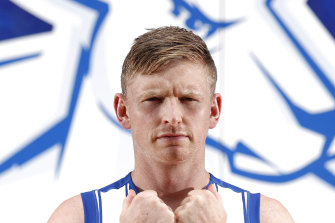 The club and former players have argued other clubs don’t face the same criticism with Carlton, Richmond, Collingwood and Essendon all keeping their marquee games despite facing tough seasons over the years.

“It does [motivate us] but I’ll echo what our coach [David Noble] said which is there are no other marquee games around the league up for grabs,” Ziebell said on Thursday.

“We pioneered this game on Good Friday and we are rapt to share it with the Bulldogs.

“We would love to build that rivalry going forward, knowing the last few times we have played have been bloody close.”

Ziebell will take his place on Good Friday after nursing an ankle problem this week while the Kangaroos will hand a debut to No.3 draft pick Will Phillips, who has impressed this season alongside other first-year players such as No.13 pick Tom Powell.

“Young Will gets his opportunity,” Ziebell said.

“He’s an inside midfielder who is really clean and hard. He’s been impressive in pre-season.”

Veteran midfielder Ben Cunnington will return for the Kangaroos after hip, back and concussion problems have kept him out for much of the last 12 months.

“He hasn’t stopped smiling and even talked to a few people for a change,” Ziebell joked.

“It will be awesome to have him back.”

The Bulldogs want to show they are a serious premiership contender after making a 2-0 start with captain Marcus Bontempelli stating his side wants to bring itself up to the level of contenders such as Richmond and Port Adelaide.

“We have managed to make a better start than we have in the past and there is a steely resolve to go on with it and protect the momentum you start to create,” Bontempelli said.

He agreed his side had yet to show it could put its foot down and break away from sides as the Power and Tigers are doing.

“We haven’t shown that in the past, it’s one of the challenges you do face as a football club, to build that resilience and what-not into your game,” Bontempelli said.

“You have to stay task-focused, you can’t get carried away with the game and scoreline at different points.

“That is a work in progress for us. You have to continue to fight for every score you can and I know North will make us fight for it.”