Gold Coast’s drive to bring in a generation of top-end players in two drafts underpinned their remarkable trade decision which has given the Cats their earliest pick in a draft in a decade.

Gold Coast surprised many clubs when they traded their compensation pick in the middle of the first round next year – currently pick 11 – for Geelong’s pick 27 on Thursday night. 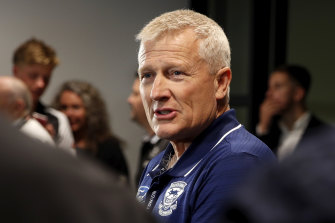 Some clubs believe up to a third of next year’s best 30 players will be tied to clubs through academies and father-sons.

"When you get to a point where you know you're trading for a player, it's not so much about the draft picks and points and all that sort of stuff," Cameron said.

"It's whether you'd trade for that player and that's the decision we made – we rated Jeremy highly enough to make the trade.

"We haven't got crystal balls, we've made the decision on where it sits. We're not that nervous. We're very happy with Jeremy."

Cameron said the club had a strategy to attack the 2018 and 19 drafts aggressively for young elite talent who could all come through as a generation. He said this was influential in the trading for Sharp.

Geelong already have West Coast’s first-round selection next year, as part of the Tim Kelly trade, as well as their own first-round pick so they presently hold three first-round picks for next year to either take to the draft or trade away.

"The deal was compelling and to give us three picks in next year's first round sets us up for a good couple of years of drafting, we hope," Geelong list manager Stephen Wells said.