The omission of league convert Roger Tuivasa-Sheck from the All Blacks’ 33-man squad for the Bledisloe Cup Tests has slipped under the radar, but it spells trouble for his goal of making the World Cup in 2023.

Tuivasa-Sheck has been on the field for 10 minutes for the All Blacks so far this year – and that came before the All Blacks’ selection panel was revamped with the inclusion of Joe Schmidt and Jason Ryan in place of John Plumtree and Grant Fox.

The All Blacks chose only four midfielders for the Bledisloe Tests, so Tuivasa-Sheck has a lot of work to do to convince the selectors he has the goods for Test rugby. 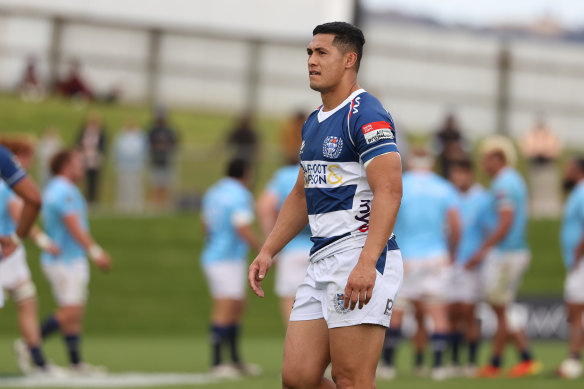 Roger Tuivasa-Sheck lines up for Auckland in the NPC last weekend.Credit:Getty

A sympathetic reading of the situation would suggest that he is currently the third-ranked No.12 in New Zealand. However, he really might be No.5 in the selectors’ minds.

The big issue for Tuivasa-Sheck is his kicking game – or perceived lack of a kicking game.

The advancements in the All Blacks’ attacking game in Test wins against South Africa and Argentina can be attributed, in part, to the kicking option provided by No.12 David Havili.

The Crusaders’ vice-captain is never going to dominate the gain line consistently like Ma’a Nonu, but he has a smart kicking game and a pre-existing combination with Richie Mo’unga.

COVID took Havili out of the selection picture at the start of the All Blacks’ Test season, but his consistent selection in recent weeks is a bad sign for Tuivasa-Sheck.

Havili is increasingly looking like the man the All Blacks are going to commit to through to the World Cup.

Behind Havili, Quinn Tupaea appears to next cab off the rank in the selectors’ minds. There are concerns about his soft skills, but he is a powerful ball carrier and turning him into a player who can cover No.12 and No.13 off the bench appears to be a bit of a project for the All Blacks.

Looking down the depth chart, things get even trickier for Tuivasa-Sheck.

The closest player to the Havili model is probably Jordie Barrett. Barrett is currently playing at fullback, but the All Blacks have not categorically ruled him out of playing in the midfield. At the very least, he is a player who is seen as being able to cover the No.12 position.

The imminent return of the injured Anton Lienert-Brown poses another problem for Tuivasa-Sheck. The Chiefs midfielder missed Super Rugby Pacific due to a shoulder injury, but he is set to return in the later stages of the NPC in early October.

Lienert-Brown, who can play No.12 or No.13, is a certainty to return to the All Blacks squad for the end-of-season tour. The revamped All Blacks selection panel could also take a fresh look at the uncapped Thomas Umaga-Jensen, the Otago and Highlanders No.12 who is probably the most powerful ball-carrying midfielder in the country.

Where does this leave Tuivasa-Sheck? He certainly needs game time, and will get some for Auckland this weekend. There also might be some consideration to picking him for the All Blacks XV tour of North America and Europe – the second-string All Blacks side that will play Canada, the Barbarians, potentially South Africa ‘A’ and another Test side.

That game time will be crucial in Tuivasa-Sheck not only developing a kicking game but another attribute that will be essential at the Rugby World Cup – versatility.

The updated World Rugby rules on return to play after a confirmed concussion – moving to a 12-day stand-down period – will be a game changer for Rugby World Cup squad selections. Even though squad sizes will increase, coaches will invariably be drawn to players who can cover multiple positions.

To date, Tuivasa-Sheck has been used at No.12 for the Blues and Auckland – and coaches will be wary of taking a ‘specialist’ No.12 to the World Cup unless they are in the Damian de Allende mode: first choice and critical to the game plan.

This is all tough on Tuivasa-Sheck. He made a great impression in Super Rugby Pacific with his work ethic and footwork. However, he did leave himself with a relatively short runway for making the World Cup. Two years is not a long time, unless there is an obvious spot waiting for any cross-code convert (the Wallabies No.15 jersey for Joseph Suaalii, for example).

A prediction: the NRL has not seen the last of Roger Tuivasa-Sheck.