Bristol 25-20 Bath: Hosts fight back to narrowly win West Country derby to take their first win of the Premiership Rugby season after the visitors had two players sent to the sin-bin

Kyle Sinckler couldn’t have wished for a better home-coming from the Lions tour as he helped Bristol drive their way out of a deep hole and off the bottom of the Premiership table.

When England’s premier tighthead prop went off with a dozen minutes of this thunderous West Country derby left, he was almost out on his feet, as the huge Ashton Gate crowd stood to acclaim him.

Sinckler had a difficult start but grew into his first game back in action – earlier than expected – after summer tour duties in South Africa. 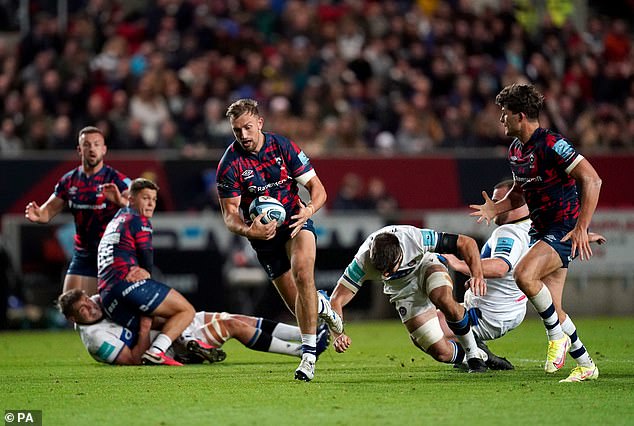 His last appearance had been an agonising one in Cape Town but this was a far more satisfactory outcome for the 28-year-old. He was typically assertive and abrasive and vocal as the Bristol forwards gradually turned the tide of this thrills-and-spills contest.

Midway through the second, Pat Lam’s men were trailing 20-11, but pack power allowed them to recover and inflict Bath’s third successive defeat of this campaign.

England head coach Eddie Jones was in attendance to see Sinckler’s powerful comeback and a vintage demonstration of Sam Underhill’s sledgehammer tackling and ever-improving link play for Bath. He saw two sides trying to gain confidence and persisting with adventure and expansion despite a torrent of mistakes. 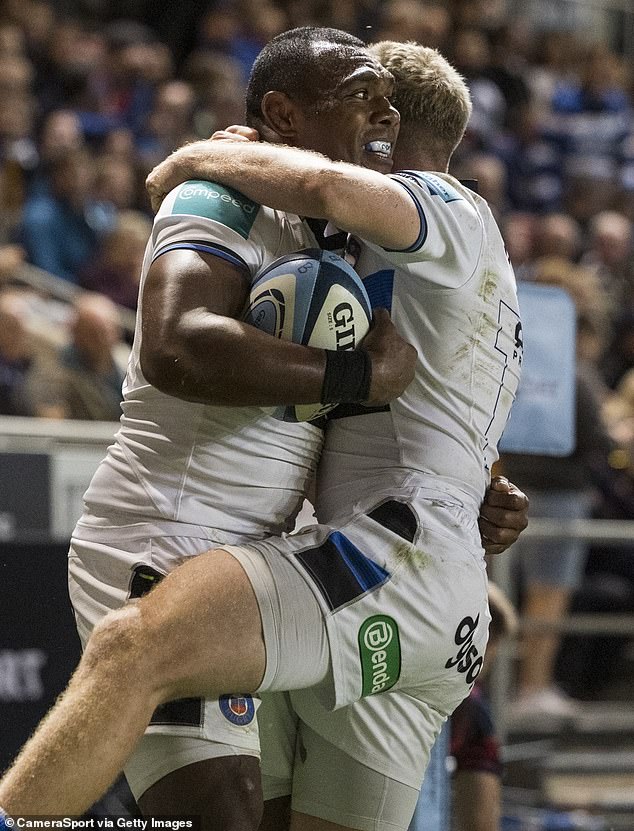 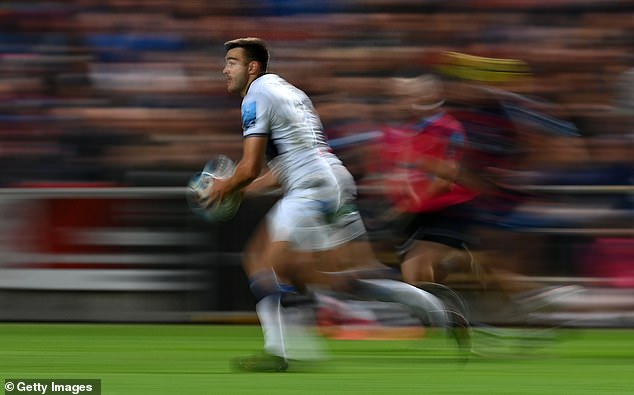 The Bears went ahead through an eight-minute penalty by Callum Sheedy, but Bath began to impose themselves and registered the first try of the night in the 17th minute as Jonathan Joseph released Will Muir and the wing surged between two flailing defenders and accelerated away to score. Orlando Bailey’s conversion put Hooper’s side 7-3 up.

It continued to be a messy, disjointed affair. The better moments were coming from Bath. Underhill flattened Will Capon to force a knock-on. Later in the half, he targeted the same opponent with the same brutal treatment. In between those monstrous hits, there was a dazzling dummy and counter-attacking break by Bailey.

Bristol hit back at their local rivals just after the half-hour mark. Ioan Lloyd’s in-field run reignited a faltering attack, Ed Holmes and Sinckler kept up the momentum, and the ball reached Steven Luatua on the left. The home captain dummied outside, galloped clear and dived over to finish in style.

But in added time before the break, Bath proved that they can be stylish too, by conjuring a brilliant team try. Bailey’s delayed pass sent Tom De Glanville into space, he passed out to Underhill and the openside picked out Semesa Rokoduguni, who touched down. 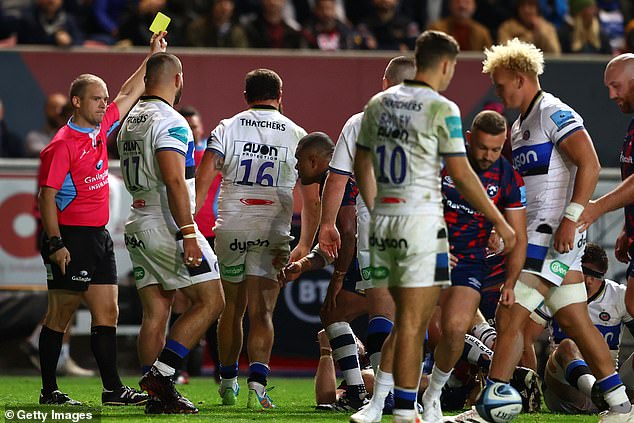 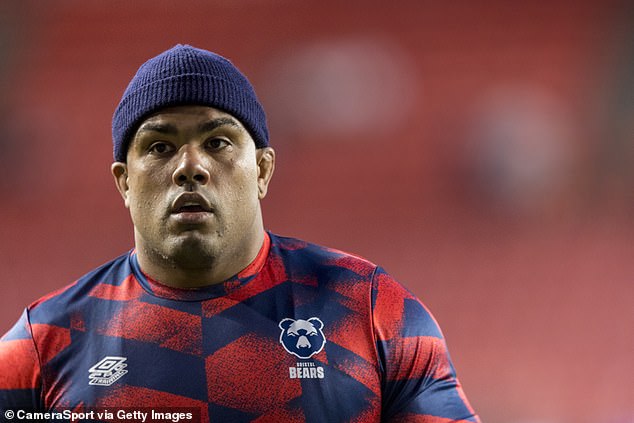 So the visitors were seven points ahead as the second half began and although another Sheedy penalty briefly closed the gap, Bath remained the more threatening team. In the 52nd minute they struck again, for their third try of the night.

Max Ojomoh’s classy chip ahead and pick-up set the wheels in motion, and the raid was maintained down the right by Rokoduguni and the relentless Underhill. When the ball came back to Bailey he kicked low to the left, Muir did well to gather, he passed inside to Ojomoh and was on hand to take the centre’s return pass to score. It was a masterpiece.

Bristol were creaking and toiling but their spirit wasn’t broken. Back they came with a lineout drive which Tom Ellis had to disrupt by collapsing the maul, which earned the Bears a penalty try and the Bath flanker a yellow card.

Tom Dunn followed him into the sin-bin and Bristol took full advantage to strike again. Jake Kerr had already been denied a try by what appeared to be a contentious call by the TMO, but he was soon over again and this time there was no doubt, as he grounded the ball from an emphatic lineout drive by the home pack. Sheedy converted and his side escaped to victory. 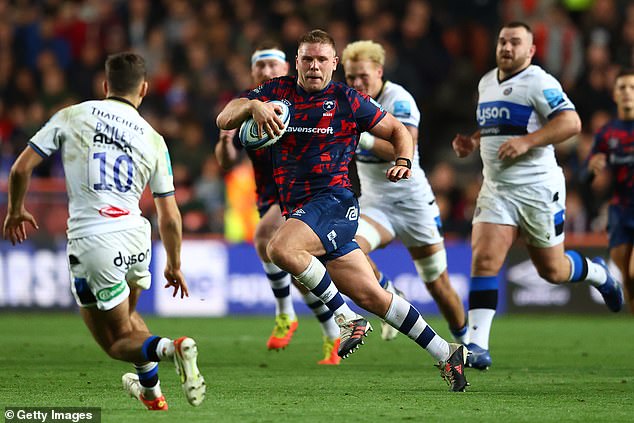 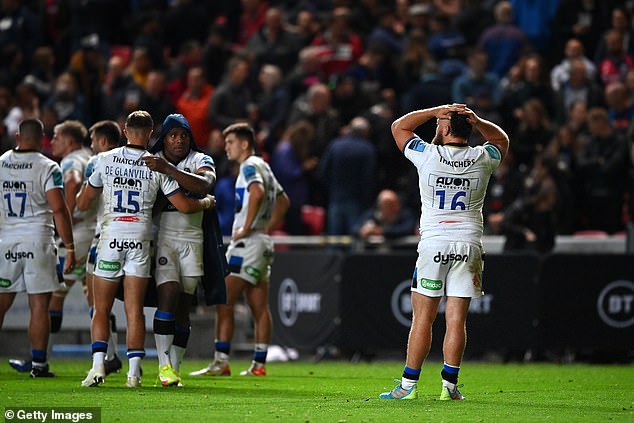