Canberra and Newcastle have picked up hosting rights for two Wallabies Tests against Argentina later this year, while Sydney fans might be deprived of a Sunday afternoon fixture at the SCG against the Springboks if COVID-19 restrictions aren’t relaxed.

The morning after Australia’s 28-26 loss to France in the second Test in Melbourne, Rugby Australia has confirmed details of Rugby Championship fixtures between the Wallabies and Argentina.

Following three matches against New Zealand and two against South Africa, the Wallabies will play the Pumas in Newcastle on September 25 before a match at GIO Stadium in Canberra seven days later.

Australia played in Newcastle last year – a 15-15 draw with Argentina – while the October 2 match in the nation’s capital will be the first international match hosted in Canberra since 2017 when the Wallabies beat Argentina 45-20.

Sydney will host just the one rugby Test this year on September 12 following RA’s decision to move the SCG match against France on July 7 to Suncorp Stadium at late notice due to the unfolding COVID-19 outbreak in NSW.

Fans who bought tickets for the France match have been granted access to the Springboks game, which will see the reigning world champions play their first Test away from home since the 2019 Rugby World Cup final. 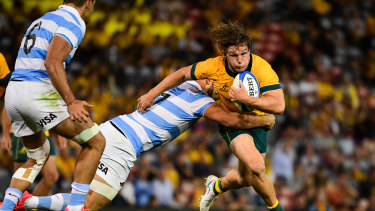 Assuming Sydney’s COVID-19 lockdown is lifted in time, the match will be the first afternoon Test in Sydney since the Scotland match of 2017 at the Sydney Football Stadium.

But a lot could happen in two months, with RA saying it will make changes if necessary closer to the match.

RA chief executive Andy Marinos said: “We are of course incredibly cognisant of the ever-changing landscape due to COVID-19 and that there may be restrictions on stadium capacities as well as the fixture itself.

“Our best intentions are to play the games as scheduled but will continue to work with our government partners and the respective health authorities in ensuring the fixtures are delivered safely for all fans, players and staff.”

Following the third and final France Test on Saturday at Suncorp Stadium, the Wallabies have three weeks before their first Bledisloe Cup fixture on August 7 against New Zealand in Auckland.

The team will then return to Australia for another hit-out against the All Blacks in Perth on August 21 before making their way back to New Zealand for game three in Wellington.

Two games in New Zealand makes Australia’s hopes of winning the Bledisloe Cup for the first time since 2002 incredibly difficult.

The Wallabies will play eight of their first 10 matches this year on home soil – including four consecutive weekends from September 12 to October 2 – before embarking on a spring tour in Europe.

The Herald also revealed earlier this month the Wallabies are likely to play a Test against Japan later this year on their way to Europe.