Dave Rennie insists he is not at all influenced by the revolutionary research carried out by former Test prop Ben Darwin but, however it worked out, both men found themselves singing from the same hymn sheet when the Wallabies side to play France in Melbourne was named.

It is perhaps not surprising that coaches keep their distance from Darwin. After all, he has calculated that the difference between good coaching and bad is an insignificant two per cent. That puts it within the margin of statistical error. It may be, then, that some coaches have zero impact. That’s an uncomfortable figure, especially for a man like Rennie who has thrown himself into the job of resurrecting Australia, but, as with everything, Darwin has figures to back it up.

Still, his key message and that of his data analysis company, Gain Line, is the value of continuity in selection. His research into the NRL indicates that making three changes following a 20-point defeat reduces you to a 34 per cent chance of winning the following week. Two changes, 39 per cent. One change, 43 per cent. No changes, a staggering 49 per cent.

All this presumably was passed over by Rennie, who insisted he was not “influenced at all” by Darwin. “But there is a bit of logic in there,” he admitted, after retaining the same 23 players for the AAMI Park Test. “We thought it was the right group to pick last time. We fell short of expectations. It was a lack of accuracy and that meant we couldn’t get continuity.“

How close the Wallabies came to being pilloried following their opening Test in Brisbane. For huge chunks of play, they were dreadful – dropping ball, defensive misreads, forward passes, intercepted passes, getting isolated at the breakdown, accidentally kicking the ball into French hands for a try. They barely made it past two phases before self-destructing.

Reputations were saved literally at the end of the day and it was the bench players who saved them. Darcy Swain pressured the French in the lineout, Taniela Tupou panicked their backs, Tate McDermott pounced on the loose ball and Angus Bell and Lachie Lonergan led the charge to secure it. Not only did they apply pressure to Les Bleus but to Rennie as well. In the end, however, he held firm, his only concession being to promote Tupou to the starting side in place of Allan Alaalatoa. 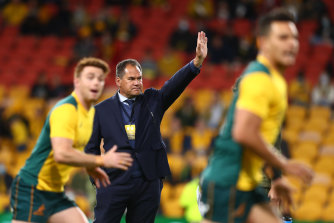 Wallabies coach Dave Rennie has stuck with the same 23 as last week’s Test opener in Brisbane.Credit:Getty

No one is suggesting that Alaalatoa is anything but a worthy Test tighthead. Indeed, it is no exaggeration to say that had John Connolly had him in his side back in 2007, the Wallabies could have gone on to win the World Cup – assuming today’s scrummaging interpretations applied back then. But Tupou is world class, some would say the only Australian player who could make a World XV. So why was there only 28 minutes and 46 seconds left on the clock when he was thrown into the fray in Brisbane last week?

There are questions, too, at halfback. Had Nic White not been injured, chances are he would have started, with relative newcomer McDermott coming off the bench. But when he was ruled out, it was the experienced Jake Gordon bumped into the starting role, not McDermott.

Clearly, he has work to do on his kicking and passing – his high pass to Noah Lolesio made it almost impossible for him to get that field goal onto his boot – but at what point does his running game tilt the scales?

Speaking of Lolesio, how much better did he look at five-eighth when not being asked to defend out of position at fullback, as he did last year on debut against New Zealand? Presumably, Dan McKellar would have argued for him to be given a place in the front line. And while Lolesio wasn’t perfect, he did his job. 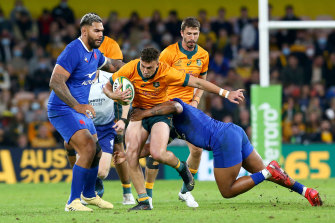 Tom Banks needs to start establishing himself as a Wallabies mainstay.Credit:Getty

Rennie appears to be looking forward to the upcoming All Black Tests in sticking with Matt To’omua at inside centre. It would be a stretch to say his form demands the No.12 jersey but he brings so much experience to the position that it can be forgiven. For now.

Still, Hunter Paisami is playing as a 12 in the No.13 jersey. The kicks he put in for Tom Wright and Andrew Kellaway were those of a second playmaker and hopefully Len Ikitau, the only bench player left unused in Brisbane, will be let loose in Melbourne to show what he can offer at outside centre.

Which brings us to Tom Banks at fullback. He may well be, as Rennie observed, the best line-kicker in world rugby, and the try he scored against the Crusaders showed conclusively what he is capable of against quality opposition. Moreover, Rennie has made him a part of the leadership group. But he has played a dozen Tests already over four seasons and Wallabies fans are still waiting for him to start leading.

Watch Game 2 of the Wallabies v France Test Series on Tuesday night with extended coverage, ad-free, live & on demand on Stan Sport from 7:15pm and also on 9Gem from 7:30pm AEST