Cape Town: South Africa’s director of rugby Rassie Erasmus has withdrawn his appeal against a two-month ban and apologised to Australian referee Nic Berry for his 62-minute video critique of the match official after the first Test against the British and Irish Lions in July.

Erasmus was found guilty of misconduct by an independent committee last week and suspended from all rugby for two months – and all match-day activities until September 30, 2022 – while South African Rugby were fined £20,000 ($37,000). The governing body has also withdrawn their appeal against that sanction. 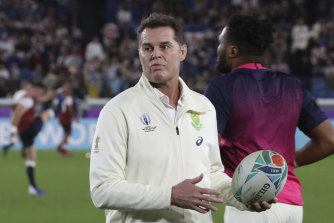 Rassie Erasmus will no longer appeal against his ban.Credit:AP

“SA Rugby and Rassie Erasmus wish to apologise to the match officials appointed to the first Test of the Springboks’ series against the British and Irish Lions,” SA Rugby said in a statement on Thursday.

“We also confirm that SA Rugby and Erasmus have advised World Rugby that they withdraw their notice of appeal and will not lodge an appeal against the sanctions imposed by the judicial committee.

“This has been a highly stressful and charged environment with unusual pressures placed on all concerned and we have no wish to prolong that experience for anyone.

“We have drawn a line under the incident and only wish to look forward. We will respect the outcomes of the hearing, allowing our national teams and rugby operations to plan with clarity for the coming months.”

Erasmus’ two-month ban will have little material effect for the Boks as they are not in action again until the visit of Wales for three Tests in July next year.

His match-day suspension does not prohibit him from helping to prepare the team for games, along with head coach Jacques Nienaber, but he will not be able to perform his controversial role of water carrier.

Erasmus was found guilty of all six charges brought by the governing body for various breaches of World Rugby Regulation 18 (Misconduct and Code of Conduct), and could have faced a much tougher sentence.