Michael Hooper has played his final Test of a career-best season after scans revealed he suffered a grade two sprain in the Wallabies’ loss to England.

Hooper limped off the field in front of 82,000 fans at Twickenham in the 55th minute after suffering the injury and did not return as his side faded in the final quarter. 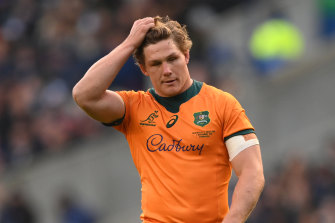 Wallabies captain Michael Hooper will miss the final Test of the year.Credit:Getty

He was sent for scans on Monday and the results have shown a mid-foot sprain, which has ruled him out of the final Test of the season.

A Wallabies spokesperson said no timeline had been placed on his return, given there is no more rugby to be played after the clash in Cardiff on Sunday morning (AEDT).

Hooper will remain with the squad until they return to Sydney at the start of next week.

Hooper’s absence will likely see Pete Samu take his place this weekend. Whoever does wear the Wallabies’ No. 7 jersey will become just the third person to do so since 2015, such is the mortgage Hooper and David Pocock have had on the position.

Allan Alaalatoa is expected to return from concussion in time to face Wales and will be the front-runner.

Nic White will be the other leading candidate. The star halfback took the reins when Hooper limped from the field against England.

When White was replaced by Tate McDermott, James O’Connor was left to call the shots.

Veteran prop James Slipper could be another outside chance, given he will be the most capped player in the side in Hooper’s absence.

Watch every match of the Wallabies, All Blacks & Springboks Spring Tours on the Home of Rugby, Stan Sport.