There was much conjecture over the combinations Dave Rennie would settle on for the Wallabies’ opening international of 2021 against France on Wednesday but don’t let that overshadow the significance of this Test for Lukhan Salakaia-Loto.

Allan Alaalatoa ahead of Taniela Tupou at tighthead was surely a tactical decision, based on Tupou’s ability to repeat what he did off the bench against the All Blacks in Brisbane last year. One feels for young Queenslander Tate McDermott, who missed out to Waratahs captain Jake Gordon on the score of experience. Some have chosen to highlight his passing and kicking deficiencies, which may be overblown. 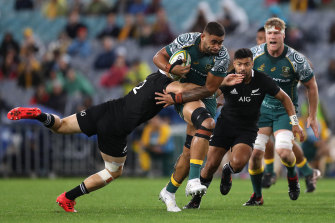 Lukhan Salakaia-Loto has not quite hit the Test heights many pundits predicted he would.Credit:Getty

Still, it was McDermott’s errant pass from the ruck base to breakaway Fraser McReight which opened the door for the Crusaders’ try-scoring blitz as the Reds attempted to out-Kiwi the Kiwis during the trans-Tasman series. Scary, sometimes, how one image can scar the selectors’ memories. That said, Gordon was a revelation for the Tahs and who knows how bad it would have been for NSW had he not been there.

If fit, Matt To’omua was always going to be selected at inside centre after the role he played for Rennie last year, when he emerged as the rock of the Wallabies until his injury. No matter that his form this season has been, well, distracted.

Speaking of sure things, the second-row pairing was always going to be Matt Philip and Salakaia-Loto. Though Philip has been virtually unsighted this season while plying his trade for Pau in the French Top 14, the memories he created last season were so rich and compelling that Rennie would have pencilled him immediately.

In truth, Salakaia-Loto was pretty much a certainty as well. With Cadeyrn Neville injured, fellow Brumby Darcy Swain not quite ready to start and Rory Arnold and Harry Hockings overseas, Salakaia-Loto was clearly the best of the domestic locks. I refuse to join the “bring back Will Skelton” brigade; any non-jumping lock who has rejected numerous approaches from Wallabies coaches in order to take the cash in Europe has made his priorities known.

Salakaia-Loto has 25 Tests, World Cup experience and was involved in all three Australian wins against the All Blacks since the 2015 World Cup final. Still, one can easily imagine Rennie’s pen hovering for just a second over the “five” jersey before he assigned it to the Auckland-born, Randwick-tutored Queensland Red.

There was a moment, right at the dawn of Salakaia-Loto’s Test career, when it seemed anything might be possible for him. The Wallabies had just scored and as the clock ticked down to full-time with the All Blacks trailing 18-23 at Suncorp in 2017, everything hinged on the kick-off. The moment was a replay of Dunedin the previous year, when the All Blacks, behind 28-29 with seconds remaining, kicked off to the right where captain Kieran Read soared high to deflect the ball back from the grasp of Izack Rodda. From that play, Beauden Barrett crossed for the winning try that denied Australia a first win on NZ soil since 2001.

Now it was the turn of Salakaia-Loto to face the music. He had made his Test debut only three weeks earlier and the All Blacks clearly aimed the kick-off at him. Read again played the spoiler. But Salakaia-Loto – or as he was still known back then, Lukhan Tui – literally rose to the occasion, taking the ball high above his head and securing the kick as the Wallabies won the day.

Perhaps that moment spoiled it for him. Perhaps it created an unreal expectation that few Australian locks would have been able to live up to. Still, what a physical specimen, at 198cm and 123kg, and the running and handling skills he showed were second to none.

But this 24-year-old, once compared to Brad Thorn by Thorn himself, has not broken through and made Test football his domain as was once predicted. It may be that blindside breakaway is his true position but the shortage of locks has forced him to do the less glamorous work of a tight forward. He has always been a valuable member of the Reds and the Wallabies, but all too rarely does he take the game by the scruff of the neck.

Perhaps now is his time. The French have named a lock pair of Toulon second-rower Romain Taofifenua, a 25-Test veteran, and Lyon’s two-Test newcomer Killian Geraci. It is a formidable combination but not one to strike fear into a man who has faced Brodie Retallick and Sam Whitelock.

French coach Fabien Galthie has picked a 6-2 bench in the expectation of the Wallabies bringing some physicality, nay, brutality to the game. It would be a shame for Salakaia-Loto and his mates to disappoint him.