If you wondered why the Wallabies spent the week in France preparing for a Test in Scotland, you were not alone.

Sure, the weather in Saint-Etienne this week was warmer and sunnier than in Edinburgh. But there was a more important reason the Wallabies decided to base themselves in the Auvergne-Rhone-Alpes.

After more than a year of planning, including two reconnaissance visits to France by Wallabies management, players were introduced this week to what will be their World Cup base in the sleepy town of Saint-Galmier. Impressed is an understatement.

The Wallabies were given three options for their World Cup base and decided on Saint-Etienne, the small city where they will play their second and fourth pool matches, against Fiji and a qualifier, at Stade Geoffroy-Guichard.

Saint-Etienne is about 50 minutes from Lyon, regarded as the food capital of France, by train. However, Australia are isolated from the main part of town where the stadium is. Their fancy hotel is a little north, in Saint-Galmier – about a 10-minute drive from where they will train in Andrezieux-Boutheon. 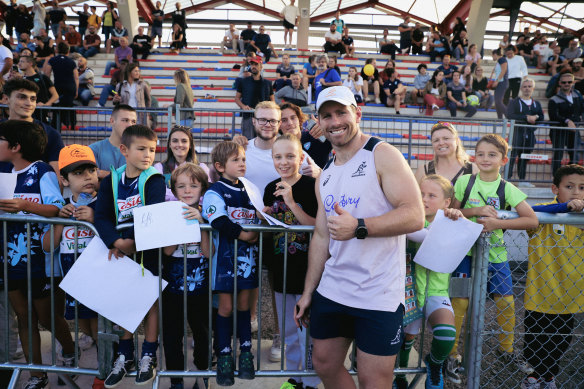 It certainly takes some navigating to find the team’s training field. Prying eyes will be few and far between.

The Wallabies have booked every room in the hotel, located on a three-hectare park, for the duration of the World Cup. A gym has been erected on site – to go with a sauna, spa, pool, cryotherapy room, pool table and dartboard – as well as beach volleyball and tennis courts. There’s even a petanque set-up.

“What we liked about it here is there is plenty of space,” Wallabies coach Dave Rennie told the Herald and The Age.

“What’s great about Saint-Galmier is the little town up top has everything you need. It’s in walking distance. We’ve already been able to make connections with guys going into various restaurants and cafes. I think that’ll be really powerful when we come back. We’ll know what to expect. I think that’s really positive.

“We’re going to be the only ones in there. Even the Michelin-star restaurant will close to the public.”

The on-site restaurant doesn’t have a set menu, with the chef preferring to surprise guests. The Wallabies have treated themselves this week.

“I left there hungry,” Rennie said. “The taste was incredible, though, and the service was pretty impressive.”

As far as distractions go, there are very few. As Wallabies fans soak up the best France has to offer, the stars of the show will be keeping a low profile as they remain focused on the task at hand.

Provided the Wallabies don’t bomb out in the group stages, they will remain at their home away from home until at least their quarter-final, set to be played in Marseille.

Becoming familiar with facilities 10 months out from a World Cup has benefits but there are plenty of players not touring Europe this spring whom Rennie will be hoping are at the World Cup.

During the 2019 World Cup in Japan, the Wallabies set up camp in Odawara, about an hour from Tokyo by train. The city was dubbed “OdaWallaby”. 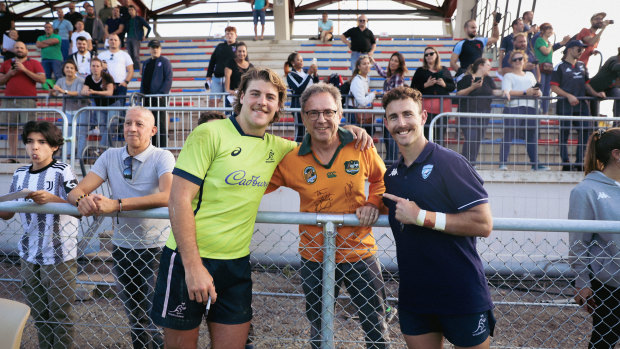 Fraser McReight and Nic White pose with a man wearing a Wallabies jersey after training at the team’s base in France.Credit:Andrew Phan/Wallabies Media

Under Rennie, the Wallabies have preferred to remain in camp on the Gold Coast during Test weeks before flying into cities two days before battle.

Traditional team dinners on Tuesday evenings and day trips will help ensure boredom doesn’t become a factor as the tournament goes on.

“It’s nice coming here and seeing the facilities,” Wallabies hooker Dave Porecki said. “But if you don’t do your job, you’re not going to be here to enjoy it.”

Rennie added: “A lot of family will come over and a lot of Wallabies supporters. A lot of them will get out and see Europe, then come back on the weekend. We’re keen to come up with innovative ways to connect with people.

“We’ve settled in very well. It’s giving us an understanding of what’s around, to connect with the community and make little alterations to the base here. It’s been awesome.”

Watch all the action from the Wallabies Spring Tour with every match streaming ad-free, live and on demand on Stan Sport.