Ireland responded to their worst start to a Guinness Six Nations campaign by running in six tries during a resounding 48-10 bonus-point success over Italy in Rome.

Scores from Garry Ringrose, Hugo Keenan, CJ Stander and Keith Earls, plus a brace for Will Connors, helped the Irish bounce back from defeats to Wales and France in emphatic fashion.

Captain Johnny Sexton, returning from a head injury, added all six conversions and two penalties as Andy Farrell celebrated the first away win of his tenure to ease mounting pressure.

Defeat for Italy was a 30th in succession in the championship, dating back six years to a victory over Scotland at Murrayfield.

Fly-half Paolo Garbisi conjured a moment of magic to set up a consolation try for Johan Meyer late in the first half and kicked a further five points but it was an all-too familiar story for the hosts. 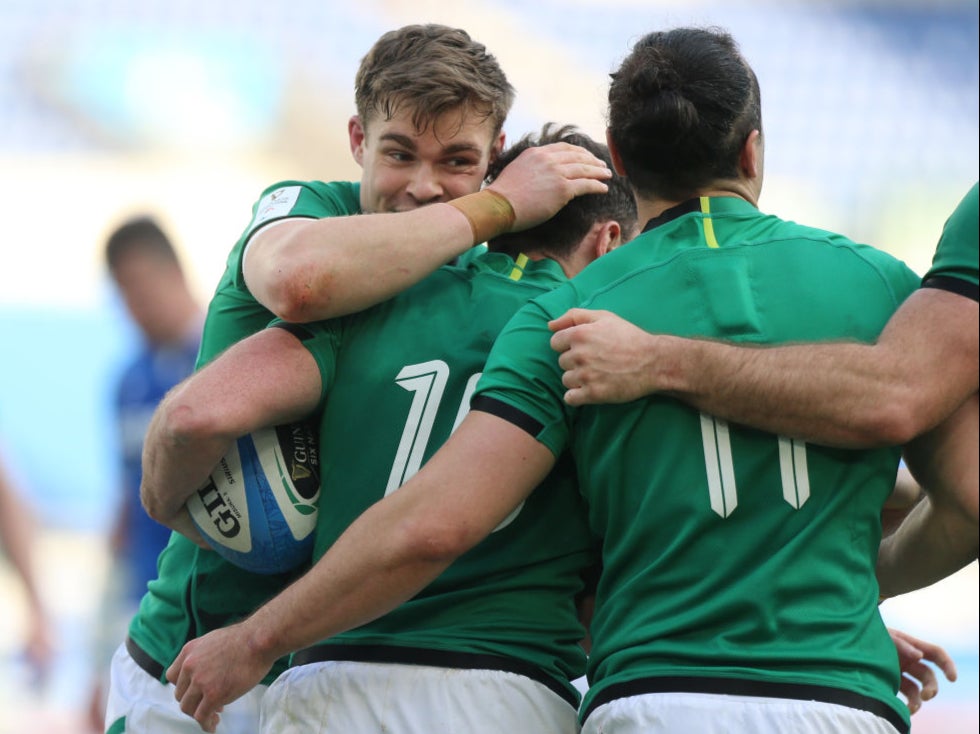 Franco Smith’s men have now shipped 139 points and 19 tries in their three losses to date.

Ireland’s dominant victory could have been by a far greater margin had they not had a trio of tries – scored by Iain Henderson, Stander and James Lowe – disallowed.

The Irish arrived at Stadio Olimpico after losing their opening two Six Nations matches for the first time and having scored a tournament-low two tries.

Garbisi’s fourth-minute penalty rewarded the hosts’ bright start but was swiftly wiped out by Sexton’s boot as Ireland sprang into life.

Lock Henderson was denied what appeared to be a certain try when the television match official deemed he had lost control of the ball before grounding, before Ringrose capitalised on the sustained pressure to burrow over.

After a second-successful Sexton penalty, Keenan and Connors – who made try-scoring debuts against the Italians in October – each repeated the trick to help the visitors tighten their grip on the contest.

Italy are on a seemingly eternal winless run in the competition and were struggling to contain their opponents’ speed and energy.

Head coach Smith had initially stuck with the side which showed moments of promise in defeat to England at Twickenham but was forced into a late change as a finger injury for Stephen Varney saw Callum Braley come in at scrum-half.

The South African was given cause for greater optimism just before the half-time whistle thanks to Garbisi producing a classy feint and offload, which allowed flanker Meyer to bulldoze over on the left flank, and then adding a tricky conversion to reduce the deficit to 27-10.

Sexton slapped the turf in frustration after conceding the try and the collective annoyance perhaps prompted Ireland’s lightning-quick response.

Within three minutes of the restart, Stander was on hand to power over to guarantee his side a bonus point.

The match became increasingly scrappy and Italy’s cause was made harder by replacement Giosue Zilocchi and captain Luca Bigi each being sin-binned during a series of penalty concessions.

South Africa-born Stander thought he had scored his second try of the afternoon between the yellow cards but it was wiped off on review after Ronan Kelleher was adjudged to have knocked on in the build up.

Casey’s lively cameo looked to have been rewarded by a maiden international assist but his neat pass to Lowe was ruled to have gone forward, leaving Ireland to rue a third disallowed try.

Replacement Earls crossed wide on the right to complete the rout in the closing moments, claiming the 33rd international score of his career as Ireland kickstarted their campaign with an overdue victory against the competition’s weakest opponent.

The Steelers have a critical 2021 NFL Draft coming off a return to the AFC playoffs. They took back the North with a 12-4 record, […]