Home » Rugby Union » It’s on: Japan v Scotland to go ahead in major relief for organisers

Japan's Pool A decider against Scotland will go ahead in Yokohama despite widespread damage caused by Typhoon Hagibis.

World Rugby confirmed fans would also be welcome at the match despite earlier speculation it could be closed to broadcasters only, but officials asked for patience after catering operations were affected by the typhoon. It is scheduled for 9.45pm AEDT at Yokohama Stadium. 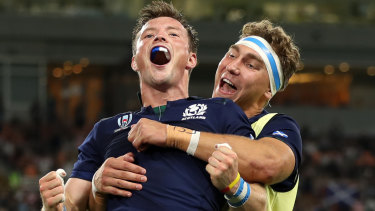 Game on: After acrimony and legal threats, Scotland will have their fate in their own hands.Credit:Getty Images

Organisers will also allow fans to bring in their own non-alcoholic beverages but will decant them into cups upon entry.

"As Yokohama International Stadium is located within the engineered flood defences of Yokohama City, there will be significant amounts of water in the surrounding floodplains and river. This is normal and should not alarm fans," Rugby World Cup said in a statement.

Three games have already been cancelled, most recently the Pool B match between Namibia and Canada which was scheduled to be contested on Sunday afternoon in Kamaishi.

"There have been landslides and flooding in the vicinity of the stadium and along access roads to the venue following torrential rain throughout the night.

"The safety of all involved in Rugby World Cup 2019 is our primary consideration and fans are advised not to travel to Kamaishi or the venue, which will be closed."

The Kamaishi Recovery Memorial Stadium was built on the site of schools destroyed by the deadly 2011 earthquake and tsunami.

The organising committee's CEO Akira Shimazu added: “We considered every possibility to make this game happen, in the end we had no option but to cancel the match to ensure the safety of the fans, teams, volunteers, and all others involved.

"It was both a difficult and emotional decision to make, however, I feel it’s the right decision."

Typhoon Hagibis, one of the most powerful tropical cyclones to ever hit central Japan, left millions confined indoors and streets deserted as record rains and fierce winds flooded rivers and threatened widespread damage.

The Namibia-Canada match, which had no bearing on the rest of the tournament with both sides out of contention for the quarter-finals, will be recorded as a draw. It is only the third World Cup match to have been cancelled. 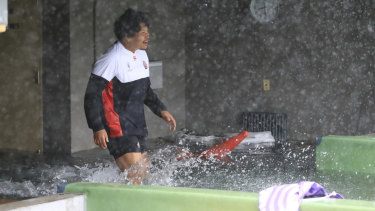 Rain or shine: The Cherry Blossoms train in a downpour at Chichibunomiya Rugby Stadium in Minato Ward, Tokyo, on Saturday.Credit:AP

Two of Saturday's matches, the Pool C decider between England and France and the Pool B match between world champions New Zealand and Italy, were scratched on Thursday when it became clear the typhoon would make landfall in central Honshu.

Organisers later confirmed the Pool C match between the United States and Tonga in Osaka and Wales's final Pool D match against Uruguay in Kumamoto would go ahead as scheduled on Sunday.

There will be an inspection of conditions at Yokohama International Stadium on Sunday morning before a call is made on whether or not to play the final match of the day, organisers said.

Japan's Pool A clash with Scotland will decide which of the two teams reaches the quarter-finals. If it is cancelled, the host nation will progress.

Ticket holders to all cancelled matches will be entitled to a full face-value refund.