Home » Rugby Union » James O’Connor back with the Wallabies … desperation or stroke of genius?

The sight of James O’Connor wearing a Wallabies training shirt in South Africa evokes vastly different emotions for those in the game with long enough memories.

The 29-year-old is yet to finalise terms with the Queensland Reds and the Wallabies wanted to make it clear O’Connor is not in the official squad … yet. But all the indications are that his readmission to Australian rugby will be rubber-stamped in the coming days. 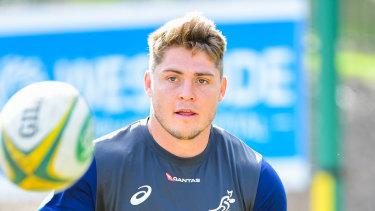 James O’Connor is back with the Wallabies but will he feature in the Rugby Championship? Credit:Rugby AU Media/Stu Walmsley

O'Connor needs to have the ink dried on his Reds contract before he can play for the Wallabies. The difference with halfback Nic White, who has been parachuted in from a stint in the UK ahead of recent regulars Nick Phipps and Jake Gordon, is that he has already signed a deal with Rugby Australia even though he is yet to confirm which Super Rugby club he will play for.

According to the Wallabies, O’Connor’s opportunity to come to South Africa only came about once Marika Koroibete decided to stay in Melbourne to be with his wife for the birth of their child. Although Koroibete has now rejoined the squad, O’Connor is still here. So, too, is David Pocock, who received a late call-up, four days after a 34-man squad had initially been announced, to continue specific rehab.

Without doubt, Michael Cheika would be keen to see O’Connor in action on Saturday (Sunday AEST) at Ellis Park in Johannesburg but one would think Samu Kerevi, off the back of a brilliant Super Rugby season, would have a mortgage on the No.12 jersey.

O’Connor could be used off the bench as a super-sub but Reece Hodge, who featured in nine Tests in 2018, has been a "Mr Fix it Man" for the best part of three years.

O’Connor’s inclusion in the touring party has divided opinion among rusted-on Wallabies fans who haven't forgotten the off-field troubles that once plagued Australian rugby's golden child. There is a degree of desperation in this ploy to bring him back.

Cheika has spoken about building depth across positions for the past three years and, in that context, it makes sense to bring back an excellent player in O’Connor.

Ahead of the World Cup, Cheika's focus will be to get the best players available to him on the park, no matter what has happened before. The performances of Matt Giteau and Drew Mitchell in 2015 show how well the approach can pay off.

Still, it is hard to imagine Cheika would have reached out to a player who he overlooked before the 2015 World Cup if the Wallabies had had a better 2018 season. Four wins from their past 15 starts is all the evidence Cheika needs to justify a bold selection straight from Memory Lane. 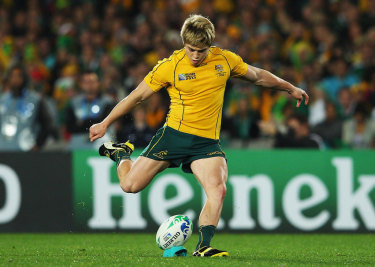 James O’Connor kicks a penalty for the Wallabies in his younger days. Credit:Cameron Spencer

It is hard to know whether O’Connor has really changed his ways. That will become clearer in the coming months. Perhaps it is telling that the most glowing endorsement of him has come from former Toulon teammates Giteau and Mitchell, who haven’t always seen eye-to-eye with the talented back.

In an interview with the Herald in 2016, O’Connor insisted he had grown up.

"Motivation is now flipped to a new level," O'Connor said. "I want to be playing for the Wallabies. You get older, your mentality changes, your goals in life change. You're not just living for the weekend, you're living to experience life."

Three months later, O'Connor was arrested in Paris in possession of cocaine. He was lucky to land a gig at Sale in the UK and went about his work knowing he was likely on his final chance.

He surely understands he’s been dealt pocket aces here given his troublesome past and now it’s time for him to go on and win the hand.

While it won’t be a reunion of the "Three Amigos" in O’Connor, Quade Cooper and Kurtley Beale, the latter is firmly fixed n the squad with a bigger job than ever. 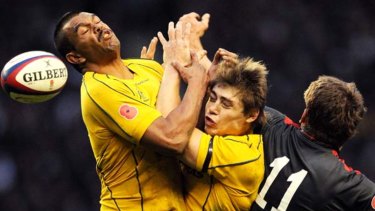 Kurtley Beale (L) and James O’Connor (R) collide as they jump for the ball.Credit:AFP

The last time Australia won a Test on the highveld was in 2010 when Beale kicked a monster penalty on full-time to break a 47-year drought.

Beale was at fullback and O’Connor was on the wing that evening in Bloemfontein in a Wallabies back line that also featured Adam Ashley-Cooper, Matt Giteau, Drew Mitchell, Cooper and Will Genia. 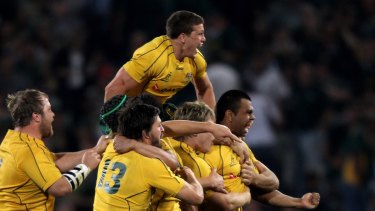 Kurtley Beale is mobbed by teammates after kicking a penalty in 2010 to help the Wallabies break a 47-year drought on the highveld. Credit:David Rogers

If Beale and O’Connor play this weekend and the Wallabies were to break a 56-year drought at Ellis Park, it would be the quickest way to warm the soul of fans just months out from a World Cup.