Australia’s rugby community, all decked out in retro gold, was looking for somewhere to hide after the debacle in Perth on Sunday afternoon. The Wallabies, despite playing for 20 minutes with a one-man advantage, again failed to beat the All Blacks. It was a shoddy performance which would have convinced the remaining two teams in the Rugby Championship – heck, the entire rugby world – that the secret to beating the Wallabies is to play a tight, structured game and simply wait for the men in gold to self-destruct.

On the face of it, the Wallabies keep making the same mistakes. That they again conceded two tries to intercepts is held forth as an example of this kind of special stupidity. I can recall five passes thrown by Australians that led to intercept tries by the All Blacks this series – by Noah Lolesio, Matt To’omua and Hunter Paisami, and then the two on Sunday, by Matt Philip and Rob Valetini.

Except for the Lolesio pass, all have one thing in common, but it may not be what you think. The first three intercepts were the result of long cut-out passes, which the New Zealanders greedily feasted upon. But I don’t recall the Wallabies throwing a single cut-out pass in Perth. No, both Philip and Valetini were attempting to unload to a player in close support. Their mistake, the common mistake in four of the tries, was that the Wallabies were passing left to right.

There is a reason coaches station their best wingers on the left, because under-pressure players instinctively pass to their left. The overwhelming majority of players are right-handers, so that is the pass which comes most naturally. The Wallabies do learn from their mistakes, hence the absence of cut-out passes, although with the All Blacks constantly sweating on intercepts, it was bewildering they did not attempt to get in behind them with some Beauden Barrett-style grubbers. But when pushed into a hurried left-to-right pass, their skills broke down.

It may be, as many critics are pointing out, that the Wallabies are attempting to play a style of rugby that exceeds their skill level. By extension, coach Dave Rennie also comes under fire for pushing his players to a standard some might never reach. 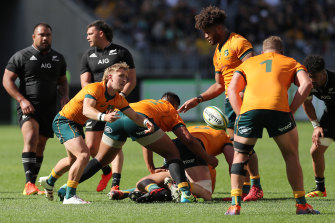 Tate McDermott was one of the few bright spots for the Wallabies.Credit:Getty

Yet how is he to know unless he pushes them? Clearly, he is not trying to do this all at once. Yet in the passage of play immediately before Valetini unloaded to TJ Perenara, the Wallabies had laid on some mesmerising attack. And let’s not lose sight of the fact that Australian fans won’t accept the Wallabies playing safe, boring rugby. They will switch off in droves.

It stunned me that some match reports – not in this newspaper – failed to mention Tate McDermott. The preoccupation with identifying those Wallabies who failed to deliver is understandable but to ignore a performance like McDermott’s by accentuating the negative was a terrible oversight.

He played with the assurance of an All Black – there is no higher praise – in exposing the holes in the middle of the NZ defence. He showed the way for his teammates. Mostly it is the job of reserves to study what is happening and find a way to improve on what the starter is attempting, but in Nic White’s case it was simply a case of emulating what McDermott had done. He did that to perfection.

The All Blacks were the irresistible force. Now comes the immovable object, the Springboks. World champions or not, the Wallabies at home have lost only three Tests out of 23 to South Africa since 2000.

We know they will box kick, which may tempt Rennie to persevere with the out-of-form Tom Banks at fullback, but it is time for a change. Unless he has other uses for Reece Hodge, the time might have arrived to play Jordan Petaia at 15. He is not proven there, but he is a natural footballer.

James O’Connor could return at 10. If not him, then Hodge. He is an ungainly looking playmaker but Hodge does good work there and Rennie has way exceeded Eddie Jones’ mantra of only giving youngsters like Lolesio more than two or three Tests in succession.

By accident or design, Rennie is employing the Ben Darwin theory of basing his side around one Super Rugby team but his obsession with all things Brumbies is misfiring. It is beyond ridiculous limiting tighthead Taniela Tupou to just 22 minutes. At the risk of being seen to push Queenslanders, what has Harry Wilson done wrong?

It will be two years on Wednesday until the 2023 World Cup begins. Will Rennie’s Wallabies be seen as having chased fools gold or will the rest of the world be green with envy at Australia’s improvement?