EXCLUSIVE: The Tigers are on the prowl again! Sell-out crowds and a perfect start to the Premiership season hark back to Leicester’s glory days… now can Steve Borthwick land their first title in nine years?

Twenty years on from their most formidable era, Leicester Tigers have regained their stripes.

With 10 consecutive league wins, the club’s best Premiership run since 2001-02, Steve Borthwick’s men travel to Bristol on Boxing Day top of the table and rolling back the years.

If it was not for Saracens’ salary cap breaches pre-Covid, Leicester — harrowingly for their fans — would have been relegated. 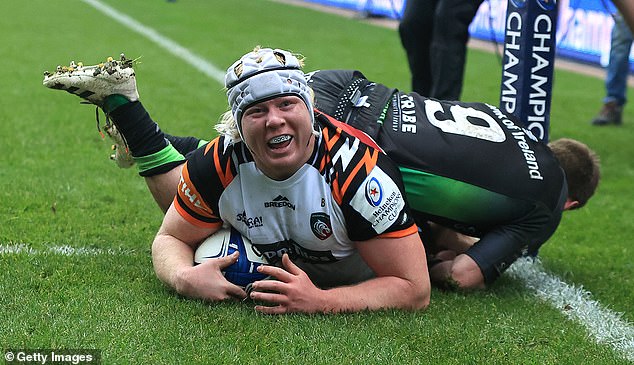 Twenty years on from their formidable era, Leicester Tigers are showing their stripes again

But now Welford Road is selling out and the good times are rolling again, with the Tigers nine points clear at the top. And their famous old boys are thoroughly impressed by this resurgence.

‘You can argue that what they’re achieving now is more impressive because they’ve gone from basically bottom in 2020 to a complete transformation this year,’ said Lewis Moody, the ex-flanker who was part of their last best league run.

Former lock Ben Kay, another 2000s stalwart, added: ‘Steve Borthwick has been ideal in the way he’s done it.

‘Recently a lot of people have said Leicester needed to get rid of the old imagery and stop harking back to “Leicester’s DNA” as this group needed to create their own, rather than trying to copy something that’s 20 years old. It’s been really impressive how they’ve rebuilt.

‘There’s an element of fortune, and Borthers probably thinks they’re further ahead now than he expected, but once you get on a run it feeds confidence.

‘You need a few years of that for it to really cement. The nagging doubts will quickly come back from when they weren’t great, so they’ve got to ride this wave as with every win it feeds into how deeply engrained that belief is.

‘The whole thing around it is psychology — you get on a run and become bulletproof. You see it in other teams that they’ve almost won the game before the other side turn up. 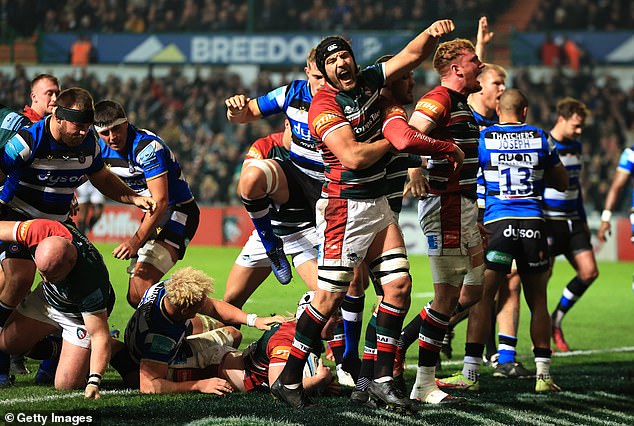 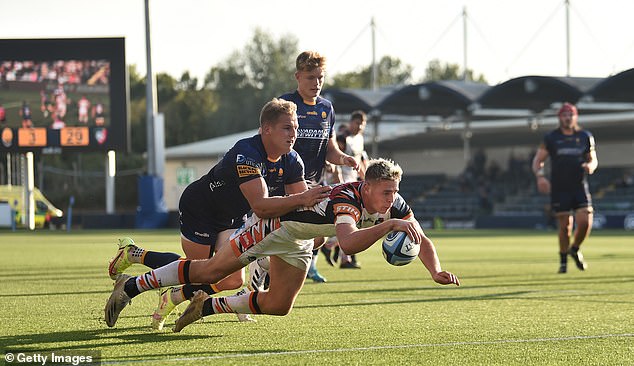 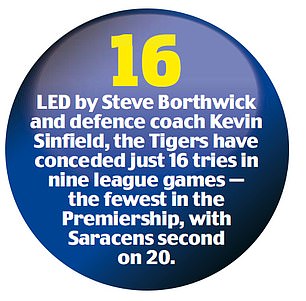 ‘I knew Leo Ulloa, the striker from Leicester City’s title- winners, and remember him saying, “We can’t put our finger on it, we just have confidence we’re going to win”.’

There are plenty of differences between the run of the Noughties and this one. Primarily, the old Tigers were right in the middle of their teeth-bearing phase where they won four Premierships, two European Cups and 57 home games in a row, but a consistent factor is fortress Welford Road. The pre-match ritual of playing Smoke on the Water to welcome the Leicester side down the wooden steps of the Crumbie terrace had become a mournful dirge, harking back to better times, and as the Tigers crumbled, the old days looked dead and buried. But now Deep Purple’s classic has hairs raised again, and opponents frightened as they were 20 years ago.

‘When you’re winning, Welford Road is intimidating,’ explained Kay. ‘I know speaking to my England team-mates there was a sense of, “Oh no, we’ve got to go to Welford Road next week” and that was a major part of it.

‘I remember clearly Martin Johnson saying before we ran out a few times, “This team will throw everything at us for 20 minutes. The key is to keep going because as some point, they’ll fade and succumb to the atmosphere. The importance of doing well at Welford Road will be too much and they’ll fall away”.’

Moody felt that buzz too. ‘Not experiencing it from the other side you became aware of what a privileged position we were in,’ he recalled. 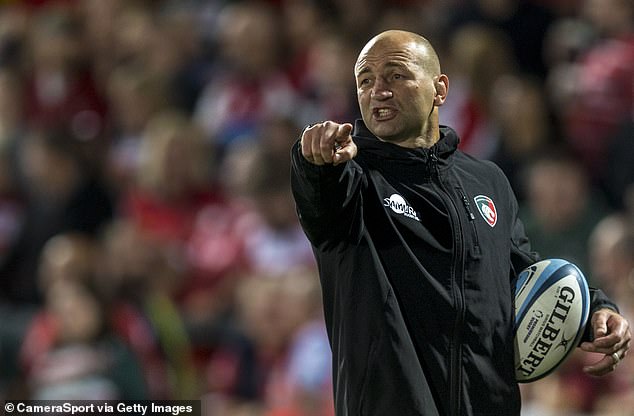 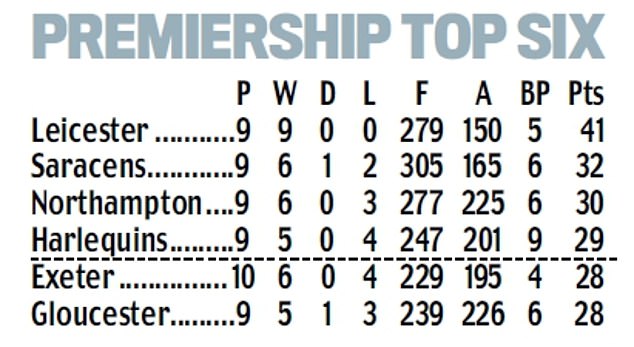 ‘Welford Road hasn’t always been that place, but during those 2000s it felt like somewhere we’d never lose, and no matter who came there it was a great surprise at the end if you hadn’t won. I remember being on the pitch and whatever the score was, I always felt anything was possible. When you’re on that streak you find a way. I’m glad to see Leicester back. The crowd believe again.’

Much of that has been down to Borthwick, who Kay and Moody both played with for England — the man of the minutiae re-establishing a great rugby institution.

‘Leicester have now built themselves on all the things that require no talent — playing in the right areas, defence, organisation, kick-chase, pressurising the opposition into mistakes,’ analysed Kay.

‘There’s no point having 15 of the most talented players in the world if others are better than you at the basics.’

With defence coach Kevin Sinfield in the coaching box — the rugby league legend who is raising huge sums for his former team-mate Rob Burrow, stricken by motor neurone disease — it is no wonder the Tigers are tackling for their lives. 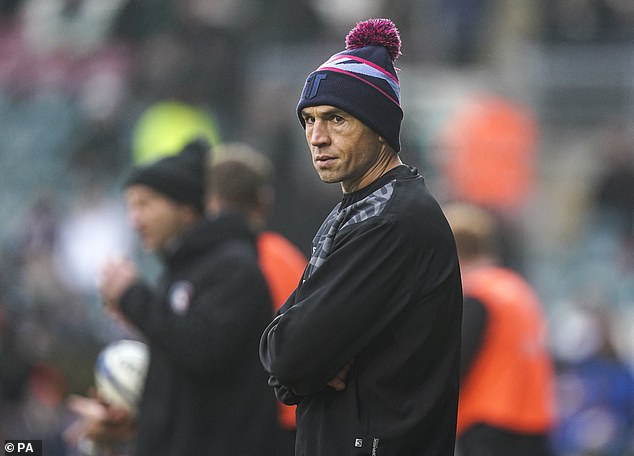 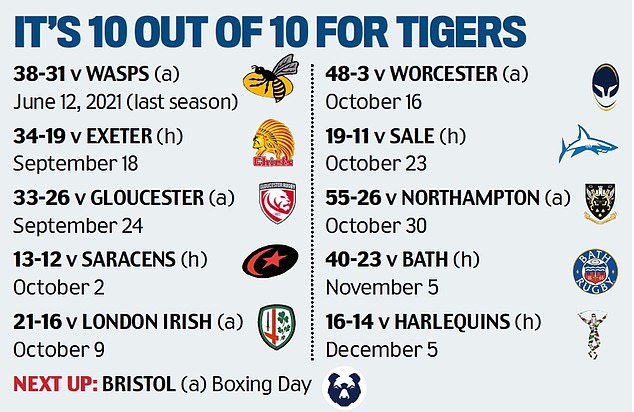 The only chink in the armour so far has been the impending departures of captain Ellis Genge and fly-half George Ford — off to Bristol and Sale respectively.While Kay thinks Ford will be trickiest to replace, even with South African fly-half Handre Pollard coming in, Moody believes Genge’s loss will hit the Tigers hard.

‘He reminds me a little bit of Martin Johnson,’ he said. ‘I’m not trying to compare the two in terms of style of captaincy, but having a figurehead to build a team around is important.’

Both will be key in the next six months as Leicester chase a first title since 2013. 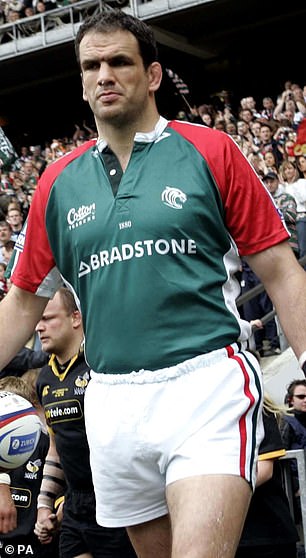 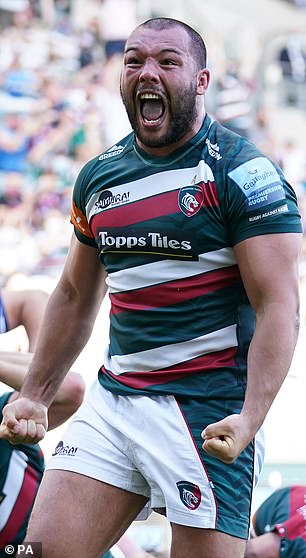 Moody has some advice for the current crop that stands the test of time: ‘We always had the mentality of, “Win every game, finish top, be top all the time” but it’s irrelevant as we finished top lots and Wasps came through from nowhere to pluck it from under our noses.

‘A defeat now might bring motivation as it gets the monkey off the back. Our five-year unbeaten run at home almost became a burden — no one wanted to be part of the team who lost!

‘It’s not worrying about a defeat, naturally one will come, but it’s making sure you nail that home semi-final and the final.

‘You don’t win anything before Christmas, but if Leicester continue their dominant form you wouldn’t back against them. But a lot happens in six months!’