Wallabies coach Dave Rennie has made the surprising claim that returning back-rower Sean McMahon could be the fittest member of the entire squad and even hinted he could join Quade Cooper and James O’Connor in the same starting XV next week against Argentina.

While Saturday’s blockbuster match against South Africa at Suncorp Stadium is front and centre, with Australia aiming to make it back-to-back Test wins for the first time since the 2019 World Cup, Rennie was asked about the reintroduction of McMahon. 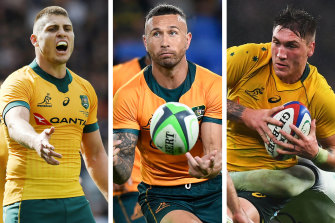 The 27-year-old has not played a Test since 2017 but left hotel quarantine on Tuesday to join new teammates, having come home from Japan where he has been playing in the Top League.

With fellow Japanese-based players Cooper and Samu Kerevi putting their names up in lights, there is no shortage of excitement to see whether McMahon can reignite his Test career with his firebrand approach in coming weeks.

Fitness, it seems, is not a problem.

“Our trainer put him through a pretty tough workout yesterday and he was in fantastic condition,” Rennie said. “His report was he reckoned he’d be the fittest in this team. That’s how good he is.

“During two weeks of quarantine, [our Wallabies trainer] turned his room into a gym, so he’s pretty much been living in a gym for the last couple of weeks. He’s certainly a consideration for next week.

After a thrilling 28-26 win over South Africa, Rennie could find no room for James O’Conner in Australia’s matchday 23 this week, despite the playmaker saying on Sunday he was ready for a return after battling a groin injury.

Cooper has been retained at No.10 after his match-winning performance, with Reece Hodge and Jordan Petaia providing utility cover on the bench for what will be another bruising encounter against the Springboks. 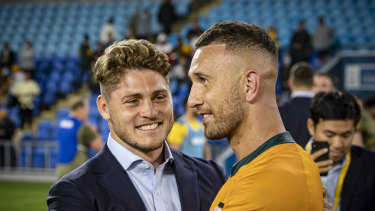 Tom Banks, despite patchy form, was again named at fullback in a near backline to last week. The only change is halfback Nic White starting in place of Tate McDermott.

As for O’Connor’s imminent return, the question remains if he and Cooper, both considered No.10s by trade, can play in the same team.

Rennie believes he can squeeze them into the same side, with O’Connor now firming as a fullback option.

“We would definitely not have played [O’Connor] at fullback a couple of months ago and prior to that because from a high-speed running perspective, he just hasn’t hit any decent numbers for the last couple of years,” Rennie said. “But he’s worked really hard over that last period and it’s the sharpest I’ve seen him. He’s definitely back into a physical shape where we think we could use him as a utility as opposed to just a 10.

“[O’Connor] would be a strong contender for next week. We feel we could definitely play both those guys in the same 23. James, like Quade, has a lot of Test footy under his belt. He’s a cool head, and you see the influence he has on the Reds. To have someone like James come back in the fold for us would be gold.”

McDermott was cleared to play after a shin injury – he only began training this week on Wednesday – but has made way for White, a decision that Rennie explained.

“We think that Whitey has been really strong off the bench the last couple of games,” Rennie said. “We think it’s a good mix; the quality of Whitey’s skill-set early and Tate’s ability to break up a game against tiring forwards.”

Rennie has shown faith in Len Ikitau at No.13, who is keeping Hunter Paisami out of the side, while props Taniela Tupou and James Slipper will return to the starting XV. Allan Alaalatoa was unavailable due to family reasons but Angus Bell has been named on the bench.

Former Waratahs prop Tom Robertson will make his return to the Test arena, three years after last running out against South Africa at Suncorp Stadium.

“It’s everything I’ve ever wanted, to play for the Wallabies again,” Robertson said. “It’s unbelievable to get my name on the bench. If we can get a win, that’d be the cherry on top.”