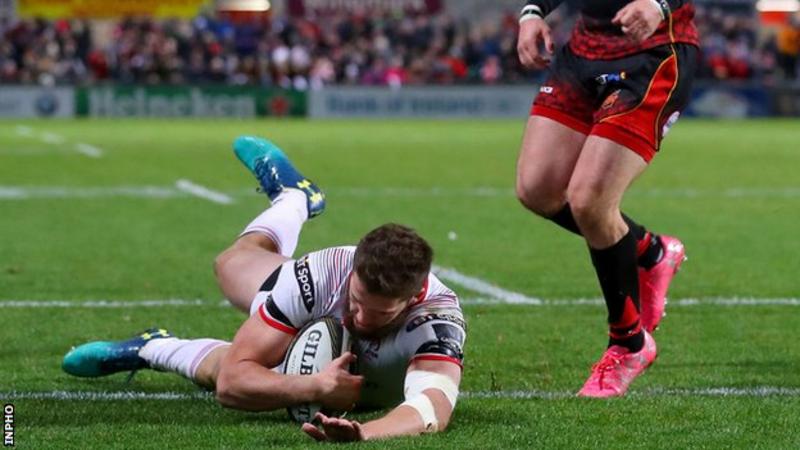 Ulster recorded their 200th win in Pro14 history with a bonus-point 36-18 defeat of Dragons at Kingspan Stadium.

Huw Taylor marked his Pro14 debut for Dragons with a try and Jarryd Sage added another score in the second half.

The Welsh side will return to Ireland in round eight when they visit Connacht while Ulster must go to Benetton.

The defeat for Dragons leaves them on the same points as Southern Kings at the foot of Conference B but Ulster have moved up to third place in the table.

Dragons have not enjoyed an away win in the Pro14 since March 2015 and their prospects of ending that unwanted 35-match streak looked bleak when they fell 10 points behind inside the opening 12 minutes.

Ulster set a blistering tempo with Johnny McPhillips varying the attack cleverly in his first start of the season and the passing of the young fly-half was able to create space for the likes of Will Addison, Lowry and McCloskey to exploit.

McPhillips teed-up Speight for the opening try with a delayed his pass for the Australian wing before Addison’s superb break left Rhodri and Jordan Williams trailing in his wake and the supporting Shanahan scored under the posts.

In between those tries, Jason Tovey became the fifth-highest points scorer in Pro14 history when he tapped over a penalty for Dragons, who deservedly pulled a try back when Adam Warren’s attack was finished off by Taylor, who showed impressive strength to wriggle his way over.

The home side responded with a try just before the break when Iain Henderson’s charging run gave them field position before Lowry demonstrated his electric footwork to accelerate past Brok Harris and Warren to score a spectacular try.

Set-piece a concern for Ulster

Ulster’s scrum and lineout had been severely tested during their European Champions Cup matches against Leicester and Racing 92 and the Irish side once again struggled to win their own ball against a determined Dragons pack.

A crooked throw by Rory Best cost the hosts a good attacking position after an excellent break by debutant wing Robert Baloucoune and the Ulster scrum also conceded vital penalties to ease the pressure on the Dragons defence.

The bonus-point try arrived in the 49th minute when McPhillips and Lowry combined once again to attack the left channel before switching play across field for the excellent McCloskey to exploit a clear overlap but, in a blow for the hosts, Lowry limped off ten minutes later following an awkward collision.

Dragons took advantage of their scrum dominance when Taine Basham and Tovey combined off a five-metre scrum and Sage picked an unstoppable line to score and close the gap to 11 points.The visitors pressed for another score to salvage a losing bonus point but their decision to attack from their own territory was punished when Jordi Murphy won a turnover and Ulster clinically attacked through Kieran Treadwell, who bounced through two attempted tackles before passing inside for McCloskey to finish off the scoring.