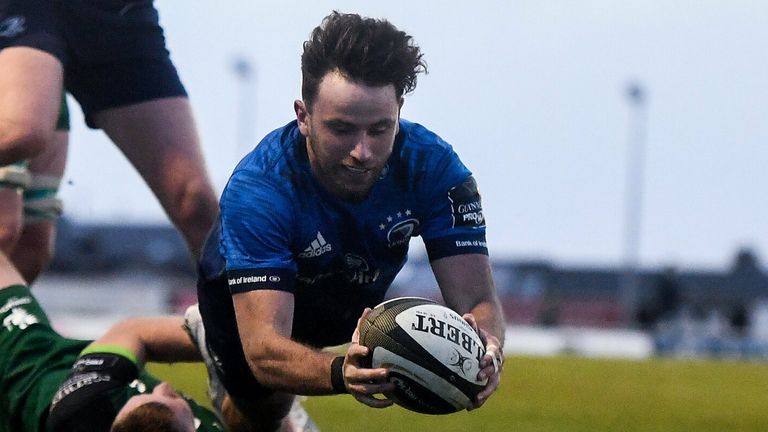 Hugo Keenan scored a hat-trick of tries as Leinster came from 16 points down to claim their opening PRO14 Rainbow Cup win with a 50-21 victory over provincial rivals Connacht at the Sportsground.

Another of Leinster’s Lions picks, No 8 Jack Conan went off injured during the first half but it looked a precautionary withdrawal.

Scarlets recorded their first victory of the Rainbow Cup with a 22-6 win over Ospreys in atrocious conditions in Llanelli.

A first-half try from tight-head prop Alex Jeffries along with a 17-point haul from Wales full-back Leigh Halfpenny was enough to get the Scarlets over the line.

All Ospreys could muster was six points from the boot of Luke Price.

The Sharks made it two wins from two in the Guinness PRO14 Rainbow Cup SA with a 34-26 success against the Lions.

The @cellc Sharks claimed a bonus-point victory over @LionsRugbyCo at Jonsson King's Park in their 2nd round fixture, an early strike from @JeremyWard_ setting the tone as they took control of the match early on. #OurSharksForever #RainbowCupSA #SHAvLIO pic.twitter.com/tckCCcMOd1

Jeremy Ward scored the Sharks’ first try in only the third minute, with PJ Botha responding for the Lions as both teams’ mauls caused problems.

Grant Williams and Thomas du Toit profited from sharper play by the Sharks with further tries and it was 24-12 at half-time after Andre Warner crossed for the Lions just before the break.

The Sharks were down to 13 men for a period after half-time when Du Toit and Fezokuhle Mbatha were both yellow-carded for offences at the ruck but the Lions failed to capitalise on their advantage.

Francke Horn did finally cross for another try but Kerron van Vuuren added a score for the Sharks to maintain a healthy lead. Vincent Tshituka ensured the Lions at least finished with a bonus-point try, with the kicking of Curwin Bosch proving a major advantage for the Sharks.

Madosh Tambwe scored two tries as the Bulls made it back-to-back wins in the Guinness PRO14 Rainbow Cup SA by beating the Stormers 20-16.

The Bulls, who overcame the Lions 24-9 last week, opened the scoring when Tambwe ran from his own half and evaded two tackles to score, with Morne Steyn converting.

Evan Roos replied for the Stormers, with Damian Willemse adding the extras, before an Abner van Reenen penalty put the home side in front.

The Stormers then had captain Steven Kitshoff shown a yellow card for leading with the forearm and the Bulls capitalised as Tambwe ran in unchallenged after the hooter had sound and Steyn converted.

After the break, Steyn and Van Reenan traded penalties before Chris Smith made it 20-13 to the Bulls with another penalty. Van Reenan reduced the deficit to four points but, despite the Bulls having Nizaam Carr yellow-carded with nine minutes left for a high tackle, the Stormers were unable to take advantage.

Rory Scannell and Mike Haley also touched down to make it 19-3 at half-time, the latter score coming after Ulster’s Will Addison was sent off for a high tackle.

Ulster captain Iain Henderson snapped back with an early second-half score, but a dominant Munster made it back-to-back victories as Scannell, JJ Hanrahan and Andrew Conway made it a six-try success.

Glasgow edged a seven-try thriller as they wrestled possession of the 1872 Cup back from Edinburgh.

That was a classic!

Glasgow regain the 1872 Cup for the first time in four years! pic.twitter.com/IjrAhb5IDl

In a bad-tempered affair, both teams made use of the new captain’s challenge rule being trialled in the PRO14 Rainbow Cup to successfully alert referee Adam Jones to red card offences, with Edinburgh’s Mark Bennett and Warriors prop Oli Kebble sent off.

Benetton followed up their shock win over Glasgow by claiming a 25-20 victory at Italian rivals Zebre in the Guinness PRO14 Rainbow Cup.

The Treviso side’s triumph against the Warriors last month came after they failed to win a single game during the regular PRO14 season, in which they lost twice to Zebre.

However, they now have two wins from two in the Rainbow Cup following a hard-fought derby in Parma.