After two weeks of training at the revived Camp Wallaby in Queensland, and only flying to Perth late on Thursday, captain Michael Hooper has been forced to deny the Wallabies have been “hiding away”.

The choice to stay on the Sunshine Coast was to have better access to training facilities, Hooper explained while attending a sparsely attended promotion in Perth.

“We don’t think we have been hiding, we just think it is a really good camp set-up,” Hooper said.

“We enjoyed our time up there in Queensland. It is great training conditions, the grounds are good, the facilities are fantastic. We just want to grow our game and evolve.”

Whether prioritising preparation over promotion pays off will be revealed – Optus Stadium will be at least 10,000 shy of a sell-out – but there is some truth to the notion the Wallabies have been concealing themselves on the Sunshine Coast.

The absentee Wallabies have left rival coach Eddie Jones not only searching for verbal sparring partners, but slightly confused about how the Brumbies-heavy Wallabies will play in the all-important first Test. Win the first Test and you can almost touch a series victory; lose it and you have to go back-to-back. 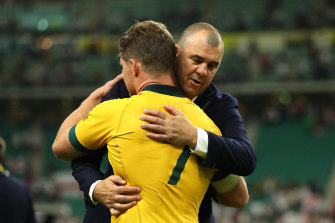 In his one win over Dave Rennie at the end of 2021, Jones saw a different Wallabies: they kicked 23 times and ran just 63 times for 260 metres. England won the possession count.

Asked whether players returning from Europe or Japan had changed the Wallabies’ style in recent years, Jones said they had developed a “fuller game”.

“I think Australia play very similarly to New Zealand,” Jones said. “If you look at the way they attack, they play similar patterns to the way most NZ Super Rugby teams play. 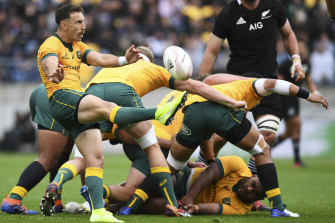 Nic White executes a box kick against the All Blacks.Credit:AP

“But the Brumbies have added to that a more ‘hide the ball’ type game and high kicking game, which is un-Brumbies like. That’s taken root in Australian rugby because of their success. They’re the most successful Super Rugby franchise and that’s added to the Australian game.

“Whether that’s come from Nic White or from Laurie Fisher or Dan McKellar, I’m not quite sure. It’s definitely given Australia a fuller game but, having said that, I still think they play very much like New Zealand.”

The major elements of the unknown for Jones in the first Test are Quade Cooper and Samu Kerevi, who were both influential in the Wallabies beating the Springboks last year, but then didn’t go on the spring tour.

Much has been made of the forward pack battle in the first Test, but Rennie would be pleased no one has spent time talking about Kerevi and his power running and offload game. 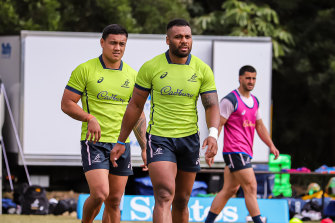 Cooper’s excellent form back in gold was largely the result of the former flashy back playing within himself, taking contact and kicking penalties when on offer. It was emblematic of where Rennie wants to take the team: pragmatic, but prepared to play. Jones appeared to be intrigued by those dual motives and questioned how White and Cooper would gel together.

“We are a year further into our development now,” Hooper said. “We made some good shifts last year; it is not a reinvention of the wheel. Dave and his crew and us as players are seeing a trajectory of where we want this team to go on the field and we have to deliver on that against England, who are a top-class team.

“We just need to evolve our rugby again and take it to another level from last year.

“We are a different team to personnel and staff and everything [from 2016-19]. Just purely on a names basis, we are very different. We play a different style than what we did. The game is evolving and we need to evolve with that and be cutting edge as well.”

Watch every match of the July Test Series on the Home of Rugby, Stan Sport. Kicks off this weekend with Wallabies v England (Saturday 7:15pm AEST), All Blacks v Ireland (Saturday 4:30pm AEST), South Africa v Wales (Sunday 12:55am AEST) and Argentina v Scotland (Sunday 5:05am AEST). All streaming ad-free, live and on demand only on Stan Sport.