The winless Waratahs have plunged further into crisis after being thumped from go to woe in a record breaking loss to the Rebels.

The 33-14 loss was equal to the Waratahs’ worst loss to Melbourne. 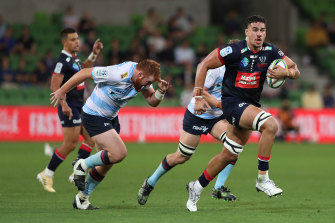 Rebel Trevor Hosea sprints away from the Waratahs defence.Credit:Getty

It’s the third time in just four matches this season NSW have recorded their worst loss to an Australian rival.

The 34- and 51-point losses to the Reds and Brumbies, respectively, were somewhat understandable given those teams have established themselves as Australia’s best. The Rebels have not earned that tag.

They only scraped home against a Force side which narrowly beat the Waratahs in their last start. Question marks lingered about their standing in Super Rugby AU.

Those question marks were erased by half time in the first rugby game at AAMI Park in 378 days. The home side had a 23-0 lead after 40 minutes. It was the biggest lead the Rebels have enjoyed at half-time in the club’s 10-year history. 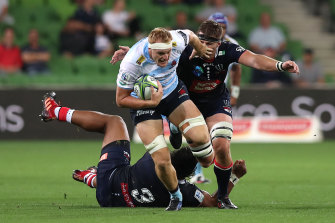 Four games into the season, there couldn’t be more question marks about the Waratahs and coach Rob Penney’s tenure.

They face the Reds and Brumbies in the next fortnight. It would take the bravest of punters to tip NSW to finish that two-week run with anything but another two losses next to their name.

The pain won’t stop there for Waratahs fans.

News this week a trans-Tasman bubble will be established in time to accomodate trans-Tasman Super Rugby was music to the ears of most.

The Waratahs must be secretly fearful of the cricket scores that await when they face the might of the New Zealand franchises.

The Waratahs looked capable with ball in hand, and even then they only scored both their tries in the final five minutes, but every other part of their game was poor.

Defensive lapses were far too common. Neither the scrum or the lineout functioned well. Their game management was not at Super Rugby level. They look the very definition of a team that does not know how to win – and might not even know where to start.

Jack Maddocks’ opening kick failing to travel 10 metres was an omen for the Waratahs’ night. 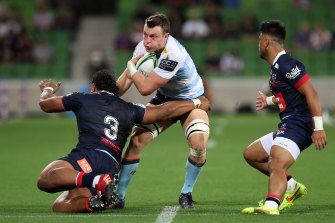 Jack Dempsey of the Waratahs gets muscled by the Rebels defence.Credit:Getty

Matt To’omua would step up, put the ball over the black dot and jog back over halfway.

Lachie Anderson scored Melbourne’s first try. The former Australian Sevens representative was the beneficiary of a very well-worked team move which started on halfway when clean lineout ball turned into a break for Stacey Ili.

After accumulating more points off the kicking tee, To’omua entered a try of the year contender and finished the game as a contest two minutes out from half-time.

The Rebels took their foot off the Waratahs’ throat in the second half. Another To’omua penalty and a Jordan Uelese try were the only points added to the half-time tally.

The Waratahs escaped the additional unwanted tag of being the first NSW team to not score a point against the Rebels when Jeremy Williams and Maddocks scored late consolation tries.

The Waratahs are a mess. The 19-point margin could easily have been 49. Penney’s days as coach could be numbered, but the task in front any leader of this team would be nothing short of gigantic.