England: Mixed boos and applause as players take the knee

England concluded their preparations for Euro 2020 with a narrow victory over Romania at the Riverside Stadium. Gareth Southgate’s side came close on a couple of occasions to finding a breakthrough in the opening 45 minutes and were eventually rewarded for their efforts in the second-half.

Marcus Rashford scored front the penalty spot after Jack Grealish was brought down inside the area.

The Three Lions will now face Croatia next Sunday in their first group stage match of the Euros, but who should Southgate start or leave out based on England’s latest display.

Similarly to the Austria match, the Aston Villa captain drew a number of fouls in the contest and eventually earned England a penalty.

Grealish was involved in the move that saw Jadon Sancho rattle the crossbar on the stroke of half-time and continued to assert his dominance after the break.

The 25-year-old was one of the few players on the pitch driving at the Romania defence, attempting to make things happen.

He simply has to start for England at the Euros. 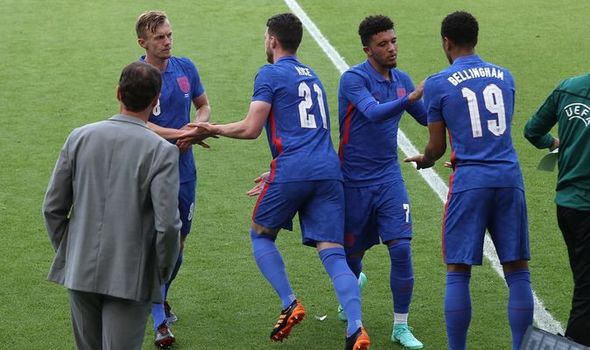 James Ward-Prowse was excluded from Gareth Southgate’s final 26-man squad for the upcoming tournament, but has given the England boss something to think about after his performance on Sunday afternoon.

The injury to Liverpool full-back Trent Alexander-Arnold means there is one extra space that must be filled and the Southampton midfielder certainly did enough to stake his claim.

His set-piece delivery skills were on show in the 32nd minute of the match, after his pinpoint delivery resulted in Dominic Calvert-Lewin rising highest to send a header onto the crossbar.

He delivered another great cross into the box after the interval, with Calvert-Lewin again coming close to scoring.

The Borussia Dortmund man demonstrated his ability in the previous friendly against Austria, and his quality in midfield was missing as England struggled to break down Romania.

Though only 17 years of age, Bellingham is deserving of a starting spot for Southgate’s side and must be trusted to perform at the tournament.

Bellingham, like Grealish, is not afraid to take risks when in possession and is capable of carrying out effective link-up play between midfield and attack.

The Aston Villa defender made a mistake within the first minute of the match and was lucky not to be punished for his error of judgement.

Mings let a loose ball run inside the penalty area, only for it to run out of play for an early corner kick.

He was also lucky not to give away a penalty against Austria for shoving striker Sasa Kalajdzic inside the penalty area.

Kalvin Phillips did little to suggest he should be starting for England against Croatia next week.

The Leeds United midfielder was only on the pitch for the opening 45 minutes of the game but failed to leave a lasting impression.

England have better options in this area of the pitch, and Phillips should not be starting.

Although the Everton striker offered hope of scoring the game’s first goal, Calvert-Lewin lacked a clinical edge in the final third.

The 24-year-old rattled the crossbar with an ambitious header in the first-half but struggled to offer much of a goalscoring threat as the game progressed.

Despite winning a penalty for the Three Lions after being bundled over by defender Vlad Chiriches, it’s difficult to see how Southgate finds room for Calvert-Lewin to join the attack.