Sir Alex Ferguson is widely regarded as the greatest manager of the Premier League era guiding Manchester United to no fewer than 13 top-flight titles.

A 27-year stint in charge of the Red Devils brought United back as top dogs of English football having been lingering behind arch-rivals Liverpool for far too long.

During that time the vociferous Scotsman employed several assistants as his second in command with many going on to embrace the challenge of management for themselves.

Now Daily Star Sport takes you through all seven of Sir Alex Ferguson's assistant managers and how they fared once they left the Theatre of Dreams.

Assistant to Sir Alex Ferguson whilst at Aberdeen, Knox was part of the backroom staff as the Dons' triumphed winning the 1983 European Cup Winners Cup, defeating Real Madrid 2-1 in the final.

After three years as manager of Dundee, Knox re-took his post as assistant manager before moving to Manchester alongside Ferguson in 1986.

Knox departed Old Trafford 12 months after their 1990 FA Cup triumph and has since been second in command at Rangers, Everton and most recently back at Aberdeen.

Kidd replaced Archie Knox in 1991 having originally been brought to the club three years earlier by Ferguson as a youth team coach.

Who do you think was Sir Alex Ferguson's most successful assistant? Let us know in the comments section.

With the class of '92 at their disposal, Ferguson and Kidd helped guide Man Utd to four Premier League titles, two FA Cups and the League Cup in 1992.

Kidd left to become manager of Blackburn Rovers in 1998 but lasted just one year in charge after failing to help them survive in the Premier League.

The former forward was last seen at rivals Manchester City as co-assistant manager under Pep Guardiola before leaving at the end of last season.

McClaran arrived during the treble-winning season of 1999 and gained a reputation as one of the most tactically astute coaches in the country under the stewardship of Sir Alex Ferguson.

Most famed for his disastrous spell as England manager, McClaren did have prior success in his maiden managerial role with Middlesbrough.

He guided the Teessiders to their only major honour to date, winning the League Cup in 2004 before historic comebacks against FC Basel and Steaua Bucharest saw Boro reach the 2006 UEFA Cup final.

He then took the reigns as England manager but was axed after the Three Lions failed to reach Euro 2008.

Spells at Derby, Newcastle and QPR followed before returning to the Rams in November 2020 as Technical Director.

Appointed as United's reserve team manager in 1991, Ryan stood in as assistant following Kidd's departure for Blackburn in 1998 before taking up the role on a permanent basis when McClaren left for Middlesbrough.

Ryan only lasted a year in the role as United finished third in the Premier League behind title-winners Arsenal and arch-rivals Liverpool.

The year was unsettled by Ferguson's plans to retire, a decision the Scotsman reversed at the end of the season.

Ryan returned to academy football at the end of the 2001/02 season as Man United's Director of Youth Football which he held till retirement in 2012.

Queiroz was the heir to Jimmy Ryan and enjoyed success during his first season at Old Trafford with United winning their eighth Premier League title.

He was then appointed boss of La Liga giants Real Madrid but returned to Manchester just 12 months later after falling short of Los Blancos' high standards; a fourth-place finish was deemed a catastrophic failure. 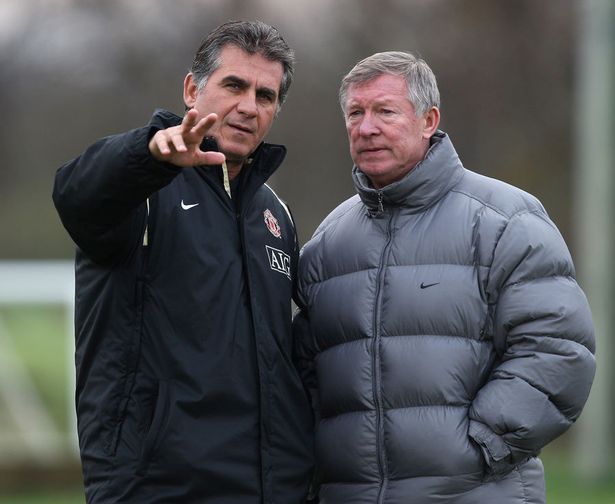 Credited as a potential successor to Ferguson, Queiroz instead re-took the reigns as manager of the Portuguese national side in 2008.

Queiroz is still involved in international management having taken charge of Egypt at the start of September.

Just like Sir Alex Ferguson, Walter Smith was a predecessor to David Moyes with the current West Ham boss taking over from him at Everton in 2002.

Smith returned to football two years later, taking up the post as assistant manager at Manchester United until the end of the season.

During his three-month spell at the club, United won the FA Cup, defeating Milwall 3-0 in the final.

Having won 21 trophies during his time with Rangers, Smith is regarded as one of the greatest managers in their history.

He was last linked with taking over as Scotland manager in 2018 but withdrew his name from contention after discussions with the Scottish FA.

Sir Alex Ferguson paid £750,000 for Phelan's services in 1989 and the right-sided defender would go on to make more than 100 appearances for the Red Devils before being sold to West Brom in 1994.

Phelan would re-join Ferguson as a member of his backroom staff at the turn of the century and then first-team coach when Steve McClaren left for Middlesbrough.

He was appointed assistant manager in 2008, when Carlos Quieroz departed for Portugal, where he remained until the Scotsman's retirement in 2013.

Caretaker manager roles at Norwich and Hull followed before returning once again to Old Trafford in 2018 as first-team coach under caretaker manager Ole Gunnar Solskjaer.

Phelan was then appointed assistant manager for a second time when the Norwegian was given the job permanently.