Arsenal boss Mikel Arteta explained how Gabriel Martinelli can help the team as he explores his options. It comes as the Gunners emerged 4-0 winners over Slavia Prague on Thursday night.

Arsenal boss Arteta has shown his credentials after bringing Martinelli off the bench on Thursday night.

It comes as the Gunners made it to the semi-finals of the Europa League after thrashing Slavia Prague 4-0, winning 5-1 on aggregate.

The result sets up a European clash against Villarreal, coached by former Arsenal manager Unai Emery, towards the end of the month.

And if they perform as they did on Thursday night, the Emirates outfit have a serious chance of going on to win the competition. 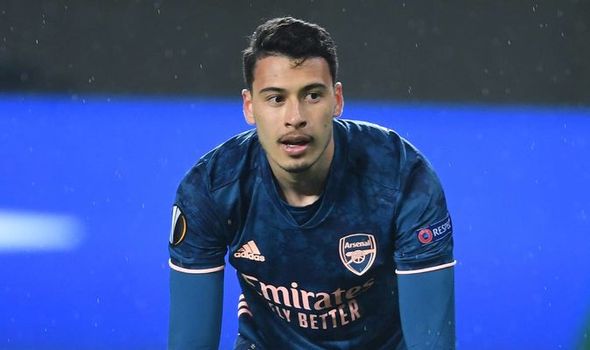 Arsenal opened in a rampant mood, scoring three times in the opening 24 minutes to put the tie to bed with all of them coming within a blitzing six-minute period.

In the first match since UEFA handed a 10-match ban for Ondrej Kudela after racially abusing Rangers’ Glen Kamara, Alexandre Lacazette, Nicolas Pepe and Bukayo Saka all put the Czech side to the sword in Prague.

However, Martinelli only managed a cameo appearance from the bench after starring against Sheffield United at the weekend.

And Arteta has explained his decision, admitting the 19-year-old had an ankle problem prior to kick-off and did not want to risk him.

“There are different reasons,” he told BT Sport.

“Gabi [Martinelli] left the pitch with a sore ankle as well and we want to make sure everyone who comes in is fully available to finish the game and that gives us more flexibility to make the changes and Emile is fit and ready to go, so that is fit.

“Gabi has the ability and hunger to score goals, so he is going to be very useful during the game.”