Arsenal booked their place in the Europa League semi-finals where they will meet former manager Unai Emery’s Villarreal following an emphatic 4-0 win over Slavia Prague. Goals from Nicolas Pepe, Bukayo Saka and a brace from Alexandre Lacazette did the damage for the Gunners, who were without their captain Pierre-Emerick Aubameyang and Martin Odegaard.

Aubameyang announced before the game that he’s contracted malaria following his time away on international duty in Gabon but surprisingly, Arsenal did not miss their captain.

The stakes were high in the Czech Republic given that the Europa League is arguably all Arsenal have left to play for this season.

Not only does it represent the opportunity to win a trophy but Arsenal can also qualify for the Champions League should they win the competition.

They showed they can be as good as anyone left in the competition in the first half, when they turned on the style. 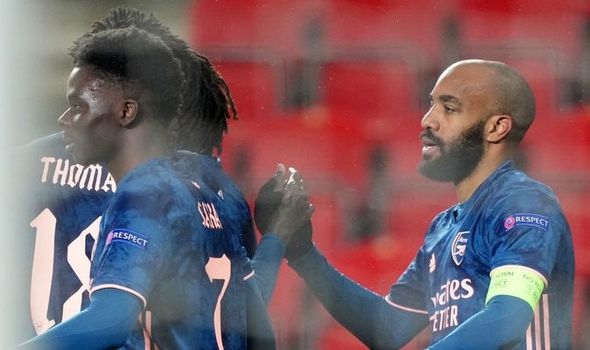 Arsenal were 3-0 to the good inside 25 minutes as Emile Smith Rowe and Saka ran riot in the final third.

Pepe, Lacazette and Saka were on target before the Frenchman added his second with 13 minutes to play following an impressive turn in the box.

The Gunners looked solid throughout and that will please Mikel Arteta, given his side have been partial to a mistake this season.

Not only that but Slavia are clearly no walkover too having already knocked out both Leicester and Rangers respectively.

Here’s how the Arsenal players rated in Prague…

Hardly had anything to do in truth. Comfortable night’s work.

If you didn’t know he was a central midfielder, you’d think Xhaka is a solid left-back. Riled the small pocket of home supporters in the second half.

Continued his really impressive form. Starting to look like a solid component of this Arsenal side.

Gave it his all and turned in an impressive performance at the back. Battled, showed leadership and defended brilliantly.

His revival really has been quite something. This was anther excellent evening’s work

Ticked things over in midfield and used the ball intelligently. His quality in midfield could prove to be a major asset for Arsenal in the coming weeks.

Made several really key interceptions and made things look easy in the middle of the park. Starting to hit form at the right time.

Brilliant display from Smith Rowe, who was a doubt heading into the contest. Thought he’d opened the scoring but the goal was ruled out for offside. He responded expertly though, proving a brilliant assist for Nicolas Pepe moments later.

The signs were there that Pepe could be a really big player for Arsenal next season. Took his goal brilliantly and seems to be showing signs of confidence.

What a player Arsenal have on their hands. He ran riot in the first half and was comfortably the best player on the pitch. His goal and Arsenal’s third was something to admire.

Lacazette cannot stop scoring. He was their leader tonight and was on hand to convert when asked. He netted his first from the spot before turning and smashing home a fourth in emphatic fashion.