Arsenal: Arteta opens up on tactical switch in defeat

Arsenal are understood to be confident of signing Brighton midfielder Yves Bissouma in the summer transfer window. Mikel Arteta’s side appear to be leading Tottenham as well as Premier League rivals Everton and West Ham in the race to sign the £30million-rated Mali international.

Bissouma, 24, has two years remaining on his contract at the Amex Stadium, but he looks set to leave this summer with several top-flght clubs scrapping for his signature.

Everton, West Ham and Spurs have all made inquiries about the possibility of a move, but the Gunners are favourites to land him, the Daily Star has revealed.

Arsenal boss Arteta is a big fan of Bissouma, believes the 24-year-old’s energy and box-to-box style will make him the prefect midfielder partner for Thomas Partey.

The manager’s future is in some doubt – but the Gunners are said to want Bissouma this summer whether or not Arteta remains in the Emirates hotseat. 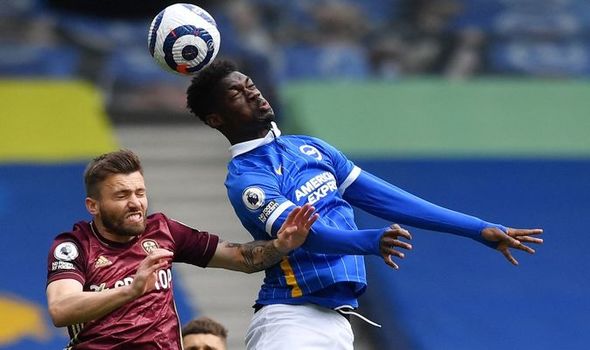 And with Brighton set to rake in double the £15m they paid to sign the midfielder in 2018, it is thought the Seagulls will be prepared to sell.

Arteta is under pressure with Arsenal languishing in 11th place in the Premier League ahead of Sunday’s trip to face Newcastle United.

And earning Champions League qualification by winning Europe’s second-tier competition is the only way to salvage their season.

To do that they must overturn a 2-1 deficit against Villarreal in Thursday’s second leg of their Europa League semi-final, which could set up a showdown against Manchester United as Ole Gunnar Solskjaer’s side currently lead Roma 6-2.

Former England international Trevor Sinclair believes Arteta is at risk of being sacked if he doesn’t learn lessons from last Thursday’s defeat to the La Liga side.

Arsenal went two goals down before a Nicolas Pepe penalty gave them a potentially crucial away goal to take into the second leg.

And Sinclair believes the manager made mistakes with his tactics, saying he got “found out” against Villarreal boss Unai Emery, his predecessor in the Arsenal hotseat.

“I think Arteta got it wrong, and I think he got away with it,” Sinclair told talkSPORT.

“If Arteta doesn’t learn, he’s going to get the sack, it’s as simple as that.”