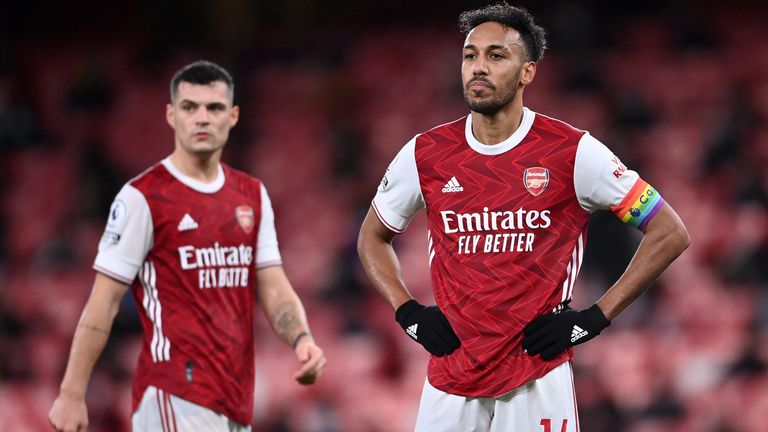 Team news and stats ahead of Arsenal vs Southampton in the Premier League on Wednesday evening (kick-off 6pm).

Arsenal must do without Granit Xhaka for Wednesday’s Premier League clash with Southampton.

The midfielder starts a three-match ban after his red card in Sunday’s 1-0 home loss to Burnley.

Hector Bellerin will miss out too, having totted up five yellow cards, but Nicolas Pepe could be back after his own suspension has ended.

Southampton boss Ralph Hasenhuttl has a clean bill of health as he heads into the game at the Emirates Stadium.

Striker Danny Ings started for the first time since November 1 in Sunday’s 3-0 victory over Sheffield United after scoring from the penalty spot as a substitute at Brighton on Monday following his return from knee surgery.

Hasenhuttl has reported a series of bumps and bruises, but nothing more significant and will assess his options with the busy holiday programme in mind.

Follow Arsenal vs Southampton in our dedicated live match blog. Highlights will also be published on the Sky Sports digital platforms and the Sky Sports Football YouTube channel shortly after the final whistle.

The last thing Mikel Arteta needs right now is a revved-up Ralph Hasenhuttl side full of confidence knocking at their door.

If this was a 45-minute match, I’d be happy to side with the Saints. Hasenhuttl’s side are notoriously fast starters and have been ahead in seven of their 12 matches at half-time, scoring 14 goals – no team has scored more.

Meanwhile, when you factor in the lack of confidence within the Arsenal ranks, along with their record of scoring just four times before the break, the 11/4 for Saints to be winning at the break does make sense. However, Southampton do usually wilt when coming under siege late on in games – as seen when blowing a 2-0 lead to Manchester United, shipping three when cruising against Aston Villa and conceding four second-half goals to Tottenham.

As long as Arsenal are still in the game with 25 minutes to go, they should finish strongly. Arteta needs them to.

Arsenal are officially in crisis, but at least the merch looks good!

Jasper Taylor is joined by Kate Burlaga and Gerard Brand to discuss the weekend’s Premier League action, as Arsenal lost again at the Emirates, meaning their current points tally has them on track to finish 15th this season (05:27). How low does it have to go for Mikel Arteta to face the sack?

The panel also discuss Liverpool’s 1-1 draw at Fulham on Super Sunday (18:30), and why the injury to Diogo Jota could have big ramifications for Jurgen Klopp’s side.

In the Regional Review, we talk all things Newcastle with Sky Sports News reporter Keith Downie – takeover talk is on the menu again, as well as Steve Bruce’s intentions for the January window (32:23).

And in part four, we discuss a turgid Manchester derby (45:30) which brought more questions than answers, including: should players really be hugging and smiling after serving up such a dour performance?