Mikel Arteta has hailed Ben White for earning his place in England’s World Cup squad with his impressive performances for Arsenal this season.

White featured in two friendlies for England in March, but did not get called up during their recent Nations League campaign, and his hopes of making it to Qatar appeared to be fading.

The 25-year-old has been in fine form this season, though, looking at home at right-back for the Gunners, despite spending most of his career as a central defender. His displays have clearly caught the eye of Gareth Southgate, who included him in his final 26-man squad on Thursday, and Arteta has revealed the club are delighted for White. 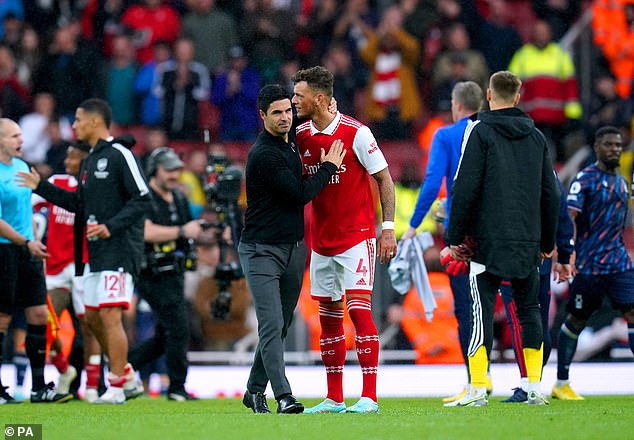 Speaking at his pre-match press conference ahead of Saturday’s trip to Wolves, Arteta said about White’s England recall: ‘He was very happy. The rest of the staff and players were so happy for him. All the credit is down to him and what he’s done.’

A heavy contingent of Arsenal players are set to head to Qatar, with Bukayo Saka and Aaron Ramsdale also making Southgate’s squad, while attacking pair Gabriel Jesus and Gabriel Martinelli have been called up for Brazil and Granit Xhaka will be representing Switzerland.

With the Premier League season set to restart just eight days after the World Cup final, Arteta has admitted he will need to keep in constant contact with his players at the tournament due to the quick turnaround from international to domestic action.

‘We can guess, but in football, guesses very rarely give you the correct answer. The way we’re going to communicate with our players is going to be very important,’ Arteta said. 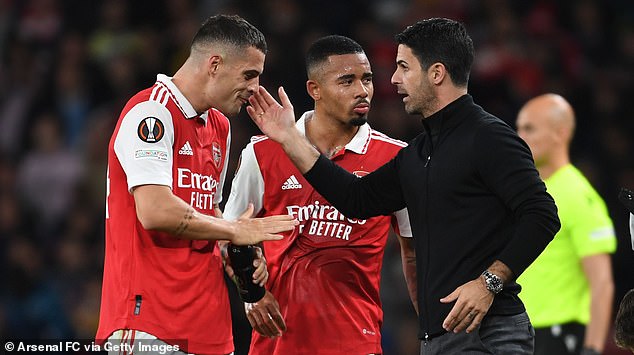 Arsenal were dumped out of the Carabao Cup by Brighton on Wednesday as Arteta rotated his squad to give a number of his first-team players a breather.

The defeat called into question whether the side’s strength in depth is an issue, especially with games set to come thick and fast in the second half of the campaign.

Arteta has revealed he is open to making more signings in January if he feels he can bring in players that will strengthen his squad.

‘If we can improve the team, we are always going to be looking to do that as a club,’ he added. 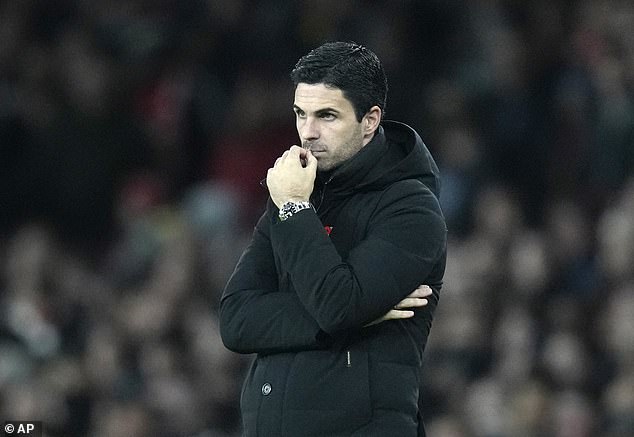 Arteta watched his side lose against Brighton, and is open to making new signings in January

Should Arsenal beat Wolves on Saturday, they will enter the mid-season break top of the table.

Excitement is growing among the Arsenal fanbase that a title tilt could be possible, but Arteta refused to be drawn on whether his side are ready to challenge defending champions Manchester City.

‘I’m not here to give opinions on that. What I want to do is finish as high as possible,’ he declared.