A controversial VAR decision to award China a penalty 20 minutes from time was enough to dash the Socceroos’ hopes of direct World Cup qualification and earn China a 1-1 draw against an Australian team that looked to be in control of this Group B clash for most of the game.

With Saudi Arabia and Japan both winning on the same day, the Socceroos now slip to third place in the group and their task of qualifying directly to Qatar next year, although still in their own hands, becomes much harder. 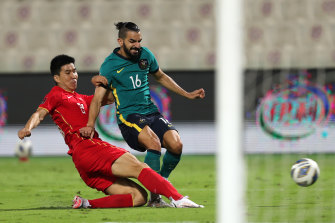 Aziz Behich of Australia is challenged by Gang Wang of China during their 1-1 draw.Credit:Getty Images

Mitchell Duke, restored to the starting line up, had given Australia a first-half lead and, while they still lacked the cutting edge that has blighted their last few games (a narrow loss to Japan and a draw at home to Saudi Arabia), Graham Arnold’s team were monopolising possession.

But when a free kick was driven into the Australian penalty area midway through the second half by Xin Xu, the danger appeared to have been dealt with – until the VAR intervention, which spotted a fractional handball by midfielder Jimmy Jeggo as he leapt to challenge China’s Brazilian-born striker Elkeson.

The spot kick, after a lengthy intervention, was awarded, and Wu Lei stepped up to finish with aplomb past Socceroo captain Mat Ryan. 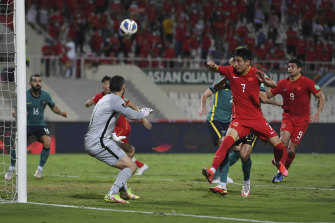 Wu Lei heads the ball during the game in the United Arab Emirates.Credit:AP

Although Arnold then rang the changes, introducing A-League golden boot winner Jamie Maclaren and attackers Awer Mabil, Nikita Rukavytsya and Riley McGree, the Socceroos could not create another opening and their World Cup campaign now lies on a knife edge.

Earlier in the evening, group leaders Saudi Arabia had beaten Vietnam 1-0 to move to 16 points, so a win here was vital for Australia to stay on their coat-tails.

The draw gained one point and stemmed the run of two recent defeats, but the result now leaves Australia five points behind the Saudis, who have 16 points, and Japan, who have 11 – an 81st minute goal from Junya Ito giving them a 1-0 victory over Oman in Muscat.

Duke and Ryan did not hide their frustration after the game.

“It is frustrating when you go 1-0 up and then concede and finish with a draw. It was a game we needed three points from and it is very frustrating to go away with just the one,” said Duke.

Added Ryan: “It’s disappointing. I don’t think we did enough tonight. We didn’t create enough clear-cut chances. There is obviously a controversial talking point, but there were other moments throughout the game where we needed to be better. But it is still very much in our hands.”

Coach Arnold was also disappointed at the outcome, which makes Australia’s chances of securing a direct route to Qatar 2022 much more problematic.

There are four games to go – the next a home match against Vietnam in late January – and things could all hinge on the penultimate game against Japan in late March, depending on how results pan out.

“We were a bit sloppy at times, but until the penalty there was pretty much only one team in the game and that penalty gave them energy. We moved the ball well and created some decent chances and we just have to be positive and move forward,” said Arnold.

As expected China, desperate for three points to keep their flickering finals hopes alive, began at bustling pace and with an attacking line-up headed by Elkeson, restored to the starting eleven, one of three naturalised South Americans in the team.

Australia’s self-confidence might have taken a blow from its last two results, but it knew it would have to dig in and deny the early onslaught, particularly an early shot across goal from another Brazilian, Alan, which just needed a touch to be converted.

However, the Socceroos did retain their composure and after the initial flurry began to take possession as they began to settle.

Martin Boyle’s cross sent ripples through the Chinese defence, and then Jackson Irvine missed a decent chance, scuffing a shot wide from an Aziz Behich cross.

Mat Leckie then had an opportunity when his shot from another Boyle cross was blocked by Junling Yan as Australia looked for the early breakthrough.

The lively Boyle was an important figure as his pace and direct running began to create chances, the Scottish-based winger being denied by a last ditch challenge from China’s English-born defender Tyias Browning.

China’s early enthusiasm seemed to have been blunted as they adopted a policy of containment, looking to hit the Socceroos on the break. Ajdin Hrustic’s free kick tested Junling Yan before Aloisio shot wide at the other end.

Australia were dominating possession but lacked the precision to create many clear-cut openings as they recycled the ball through midfield.

However, things changed in the 38th minute when they produced a neat build up and telling cross – Hrustic flicking a pass to Boyle for the latter to set up Mitchell Duke to head home at the near post.

Duke was one of two changes to the starting line up – Milos Degenek at the back to replace the injured Harry Souttar was the other – and there had been plenty of debate about his inclusion ahead of A-League golden boot winner Jamie Maclaren. That goal was enough to vindicate Arnold’s judgement.

Leckie had a chance to double the advantage shortly before the break when set up by a lovely outside of the foot pass from Hrustic but saw his effort blocked by the goalkeeper.

Australia rarely looked in any trouble for much of the second half and controlled both possession and tempo as China offered little save for an Aloisio shot which Mat Ryan saved easily.

However, the game can turn in an instant, particularly when there is only one goal in it.

When Jeggo leapt to contest a free kick as it drifted into Australia’s penalty area it looked as though he had done enough to put Elkeson off, the latter’s header causing no problems – until the referee’s attention to a potential handball was drawn by the VAR.

After a lengthy delay the arbiter took the video assistant’s advice and pointed to the spot. Wu Lei dispatched his shot with precision and the Socceroos had been pegged back, their World Cup dreams suffering a major blow.