Doha: Federal sports minister Anika Wells was sitting with FIFA president Gianni Infantino at the Al Janoub Stadium when Craig Goodwin scored the goal that gave the Socceroos a shock lead over France.

“Thank you to the Socceroos for giving me the greatest moment I’ve ever had in the big kahuna box last night at minute nine,” she said.

“I was seated next to the FIFA president and let out some kind of guttural noise when we got the goal, looked around – [it was] just me on my Pat Malone, celebrating.”

So just imagine how her counterparts from Saudi Arabia and Japan are feeling right now.

Australia ultimately couldn’t get the job done, but those nations – who were in the same qualifying group as the Socceroos – have taken the prized scalps of former champions Argentina and Germany in two of the biggest upsets this tournament has ever seen.

Despite an opening-round disaster from the host nation, it seems – as has long been promised – Asian soccer is finally progressing. And Australian soccer is obviously struggling to match the pace.

This is the Socceroos’ fifth straight World Cup appearance, but they have one of the worst winning records in the world, with just two victories from 17 matches to date. Just getting here is not enough to keep those in the game happy. They want more.

That’s where Wells comes in, pledging to help the “sleeping giant” of Australian sport by revisiting the way government funds are distributed and keeping an open mind on where and how they can be spent.

“I’m putting a lot of thought into this,” she said.

“I’m lucky to have become the Australian sports minister at this watershed moment for us as a country – we are on the green and gold runway now to the Brisbane 2032 Olympic and Paralympic Games, we have about 30 major international sporting events that we are hosting as a country between now and then. 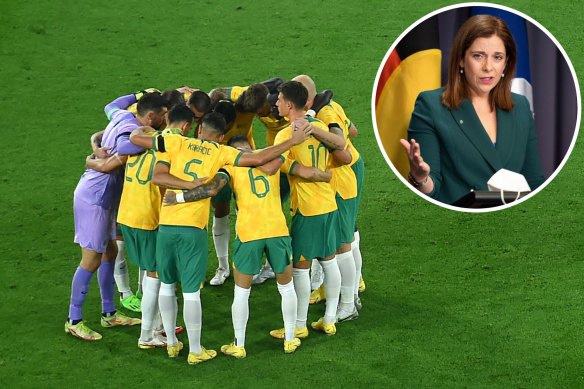 Sports minister Anika Wells has thrown her support behind the Socceroos.Credit:Getty Images

“I’m trying to take a long-term view of this and say, what does success look like for us at the end? Everyone’s got a different view about what success looks like, so I’m going to try and bring us together on that, and then look at what do we need to do 10 years out to make that possible?”

It will take a lot more than just more free money, but it’s impossible to imagine the Socceroos becoming a global force without much greater government support. Saudi Arabia, for instance, has sunk billions from their Public Investment Fund – the one that is bankrolling the LIV Golf tour and the purchase of Newcastle United – into soccer, committing almost $3.5 billion into domestic clubs via sponsorships over the course of 2022 alone.

The Australian team is also training at the $1.3 billion Aspire Academy facility in Doha – the glistening jewel in the crown of Qatar’s sporting “project”, which Wells toured on Wednesday. Soccer is still waiting for its own national headquarters in Australia.

Football Australia is on record with their discontent over the lack of high-performance funding their national teams receive. This year, the Socceroos haven’t received a single dollar from Sport Australia, whose model prioritises Olympic sports where the country is deemed to be a chance of winning a medal.

FA’s legacy program for next year’s Women’s World Cup has unlocked $280 million in federal and state government funding, which is a positive step – but as one FA staffer remarked, you don’t see the sort of reaction Goodwin’s goal triggered at Melbourne’s Federation Square when a swimmer performs a flip turn.

“There’s a lot more to sport outside the Olympic sports specifically, but I think the runway gives us the opportunity to think about this a bit more holistically with a structural approach,” Wells said.

Back home, the usual recriminations are unfolding whenever the Socceroos falter on the big stage. On the SBS broadcast of Australia’s 4-1 defeat to France, former Socceroos Craig Foster and Mark Bosnich criticised the lack of “vision” in the game and the perceived absence of a broader plan for player, coach and club development. 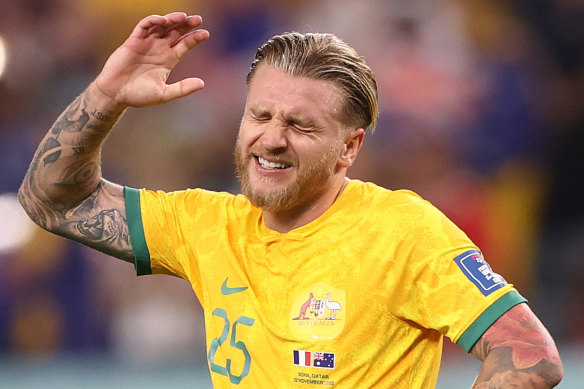 Mark Schwarzer and Harry Kewell, who are in Doha on media duties, were at the press conference fronted by Wells and Johnson on Wednesday, and both grilled the FA chief over the high cost of registration fees for talented juniors – a perennial issue which is pricing out the working-class and new migrants from setting foot on the official “pathway”.

Johnson insisted soccer already had a plan – the “XI Principles” he instigated in his first year in the job – but that the fruits of it would take time to bear, and that other projects like a new digital registration system were designed to reduce the cost of playing for parents and families. There is also a planned national second division for men, to be launched in 2024, that will create more opportunities for players and coaches.