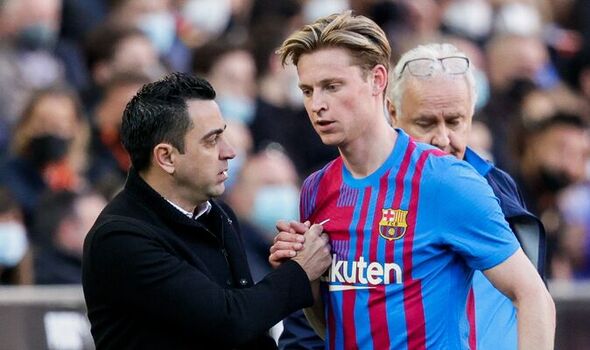 Barcelona boss Xavi has indicated that he wants to keep Manchester United target Frenkie de Jong at the club, but accepts he may have no choice but to sell due to their “economic situation”. United are set to undergo major changes in the summer transfer window and signing a box-to-box midfielder is seen as the top priority.

De Jong appears to be at the top of their list, with Erik ten Hag previously working with the midfielder at Ajax. United’s main stumbling block may well be their inability to promise Champions League football next season.

But that hasn’t seemingly put United off trying to lure the Dutchman to Old Trafford in a deal potentially worth around £60million. De Jong has been a regular for Barcelona this season, but has struggled to live up to expectations since his move three years ago.

Xavi’s preference would still be to keep the midfielder given his importance to his starting line-up. However, the Barcelona boss admits the club’s financial situation may end up dictating if they cash in on De Jong.

“For me he is very important,” Xavi said. “He has been a starter practically always, except when he has rotated due to tiredness, fatigue or competition.

“For me it is fundamental, but we all depend on the economic situation of the club.” He added: “The circumstances of the club are what rule.

“I am a very important part of decision-making, as a coach. It is logical that we depend on the economic situation. In a few days we will know what the situation is to know what we can do.

“The economic situation keeps us at bay. It marks the present and the future of the team”.

Ten Hag was the man who helped De Jong become a star on the world stage during their two years together at Ajax. The midfielder was a key part of the Ajax side which reached the Champions League semi-final back in 2019 before his move to Barcelona.