Holders Bayern without Robert Lewandowski; Marco Verratti among PSG absentees; follow Bayern vs PSG via our dedicated live blog on Sky Sports website and app on Wednesday; kick-off at 8pm Team news, stats, kick-off time ahead of Bayern Munich vs Paris Saint-Germain in the Champions League on Wednesday.

Bayern Munich are without striker Robert Lewandowski, who has been ruled out of Wednesday’s first leg with a knee injury.

Lewandowski, who will be joined on the sidelines by Corentin Tolisso and Douglas Costa, is also doubtful for the second leg on April 13.

Bayern have Jerome Boateng and Alphonso Davies available again after the pair missed the weekend Bundesliga win at RB Leipzig through suspension.

But midfielder Marc Roca has been ruled out, while winger Serge Gnabry has tested positive for coronavirus. Paris Saint-Germain are without the suspended Leandro Paredes and are sweating over the fitness of midfielder Daniel Pereira.

Marco Verratti and Alessandro Florenzi will sit out the first-leg tie after returning positive coronavirus tests. 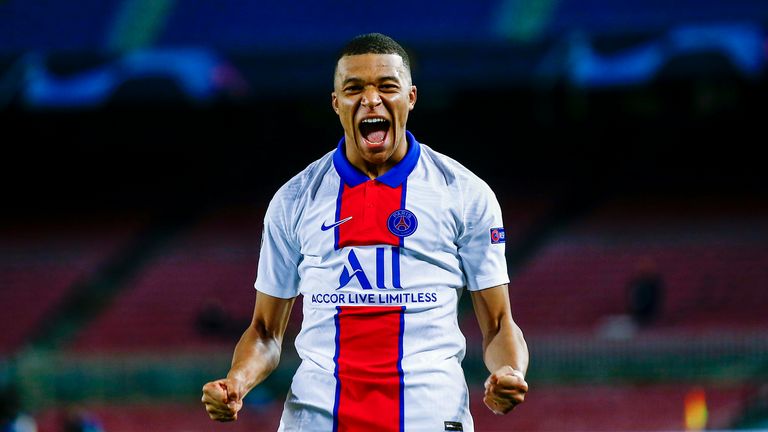 The two sides met in last year’s Champions League final with Bayern winning the trophy but Flick insisted he was wary of a side under new stewardship in Mauricio Pochettino – in particular, the speed of Neymar and Kylian Mbappe.

“Paris are a new team with a new coach,” said Flick. “I don’t think that game matters anymore. We want to reach the semi-finals and the final. That is our aim.

“They have a solid defence, a very good goalkeeper, but up front they have enormous quality. If we lose possession then we have to stop them quickly. We also have to put them under pressure early.”

Pochettino’s side slumped to a 1-0 home defeat to Lille in the league last time out but the former Tottenham boss was in a bullish mood about his side’s chances in Europe.

“We’re playing the champions of Europe and of the world. We respect them, but we have faith in our ability and we’ve come here to win,” he said.

“Bayern are a very well-organised team, playing with a high defensive line and with attacking players able to win a game individually. We will have to find the right balance, not overcommit and be careful not to lose the ball in dangerous areas.

“People talk a lot about Neymar and Mbappé, but the 11 players I decide to put out there tomorrow will be trusted to do the work needed for us to win. Last season was a final. This is different, it’s a two-legged tie.”